Coming off an exciting first week of the season, teams across the nation have made their early season adjustments. And there are some major-conference programs hoping to avoid an 0-2 start after subpar efforts in Week 1.

The weekend kicked off with a couple of marquee matchups on Thursday and Friday night, and we’re once again ready for a big Saturday.

This rivalry never gets old

For the first time in its history, Michigan Stadium will host a night game after 520 day contests as Notre Dame (0-1) visits hoping to put behind its disastrous home loss last week to South Florida. Michigan (1-0), meanwhile, is coming off a weather-shortened victory over Western Michigan in its opener.

Both teams will don throwback helmets and uniforms. ND players will have a shamrock on each end of their helmets and their jerseys will be white, green and gold. Check out the new look here. Michigan’s helmet will look pretty similar to its current one but will have the player’s number on each, and the jersey will feature the block ‘M’ in the middle on the front. Check out their new look here.

When these teams met the last two seasons, Notre Dame had its problems with Michigan’s quarterbacks pulling off late heroics to crush the Irish dreams.

In 2009, ND’s defense allowed Tate Forcier to rally Michigan to victory as he threw for 240 yards and recorded 70 on the ground. The spunky quarterback led the game-winning drive, throwing for the winning score with 11 seconds left on the clock. 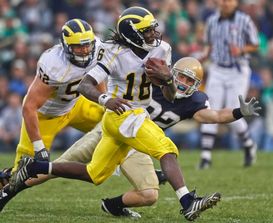 Last season, Denard Robinson had a performance for the ages, recording 502 total yards, including an 87-yard touchdown run and the game-winning rush with 27 seconds left to deliver the victory.

ND was burned in consecutive seasons by Wolverine signal-callers.

In the shortened game last week against Western Michigan, Robinson only threw for 98 yards and rushed for 46, but the Wolverines ground game came to life — just as head coach Brady Hoke and coordinator Al Borges envisioned this offseason.

Michael Shaw and Fitz Toussaint combined for 134 yards and three scores on 15 carries, giving the team exactly the kind of balance the offense needs to be successful without putting too much pressure on “Shoelace.” This week, the Wolverines will face a more stout defense than their in-state rival — and a more committed ND defense than the one they saw last season.

Bob Diaco’s unit really came together as the 2010 season progressed, and it was the defense which catapulted the squad to its season-concluding four-game winning streak. With Robinson still grasping Borges’ pro-style offense, expect Diaco to mix things up schematically and keep “Shoelace” guessing. Although he is a gifted runner, Michigan’s coaches want Robinson to commit to staying in the pocket more often than not. But if Diaco dials up pressure, we may see Robinson be forced to take off and run — which could be a good thing or a bad thing for the Irish.

One player to keep an eye on Saturday night is Louis Nix, who recorded seven tackles last week against USF. The massive nose guard will be key to the Irish grounding the Michigan rushing attack as well as getting inside pressure on Robinson.

Offensively for the Irish, they were at their best with Tommy Rees at the helm last year -- and last week in relief of Dayne Crist. But they were at their best in 2010 because head coach Brian Kelly simplified that offense, and he had Robert Hughes as the rugged runner complementing Cierre Wood. Jonas Gray has to put last week’s goal-line fumble behind him and be that bruiser that the Irish need. And when the Irish do throw the football, Rees should be looking for star receiver Michael Floyd, who had two touchdown receptions last week, and tight end Tyler Eifert often.

This Michigan defense created turnovers last week, but Greg Mattison’s unit still gave up chunks of yardage to Alex Carder and WMU. The key for the Wolverines in the opener was their success when they blitzed. Can Rees deliver consistently while facing the pressure? Expect Mattison to come early and often as he did while coaching the Baltimore Ravens.

Check this out: Courtesy of The National Football Foundation, take a look at video of the Notre Dame-Michigan contest from September 11, 1993, in Ann Arbor. Lou Holtz and No. 10 Notre Dame upset No. 2 Michigan 27-23 en route to finishing the season No. 2 in the country with an 11-1 record.

Last fall, it was a Penn State quarterback making his very first start on the road. But Rob Bolden wasn’t just the Nittany Lions’ new starter — he was a true freshman under center. 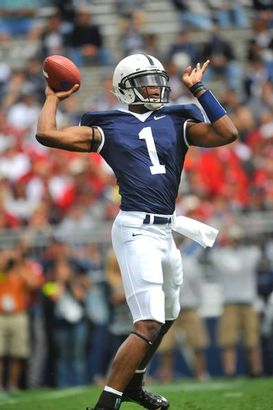 Things didn’t go well for Bolden and the Nittany Lions in Tuscaloosa, and Bolden now is splitting time with Matt McGloin after their competition for the starting job didn’t produce a winner. The duo looked fine last week, but the competition becomes much stiffer on Saturday when the Crimson Tide comes to Happy Valley.

But the Tide have their own quarterback issues with A.J. McCarron and Phillip Sims. Both young signal-callers threw two interceptions in last week’s 48-7 victory over Kent State. What’s troubling for head coach Nick Saban is that he doesn’t need his quarterback to do anything more than manage the game. ‘Bama is set on offense with Heisman Trophy contender Trent Richardson and receivers good enough to pick up first downs and keep the chains moving. And the defense? Saban doesn’t throw praise around often, but he couldn’t help but talk up Kirby Smart’s players throughout the offseason.

No matter who is under center, he just has to be mistake free. But each will face a tough test in Happy Valley.

Defensive tackle Devon Still, middle linebacker Glenn Carson and the entire secondary will be difficult for this Alabama offense to handle. Can Still and Carson lead the front seven in containing Richardson? The junior running back rushed for 144 yards and a touchdown on 22 carries against the Nittany Lions last season, so Tom Bradley’s unit knows it must play better to give Joe Paterno a chance to beat an AP Top 5 team for the first time since defeating Arizona in the 1999 season opener.

Avoiding turnovers, cashing in on their scoring opportunities and limiting Richardson’s effectiveness is the game plan for the Nittany Lions.

The only problem is that it’s easier said than done.

The offense under Bryan Harsin and Major Applewhite in their first game as co-offensive coordinators at Texas looked good last week against Rice, as the Longhorns gained 229 yards on the ground and 277 yards through the air. Even though it was against the Owls, the offensive line looked more physical and the ‘Horns looked much more committed to the run with true freshman bruiser Malcolm Brown and change-of-pace Fozzy Whittaker in the backfield. If quarterback Garrett Gilbert can get help from his rushing attack, he will be put in better situations to make plays through the air. Gilbert passed for 239 yards with one touchdown with no interceptions against the Owls.

Against the Cougars, Texas will be facing a tough and physical 3-4 attack that shut down the Ole Miss run game last week, holding the Rebels to 64 yards on the ground. Texas must be able to run the football effectively to win this game.

Jake Heaps and the Cougars’ talented running back trio wasn’t able to get moving offensively against the Rebels, and they'll find it difficult to move the ball this week against Manny Diaz's unit, which will use its controlled chaos to try to confuse the young signal-caller.

Will Texas be looking ahead to UCLA next week? Keep in mind that the Longhorns want very badly to avenge last year’s 34-12 loss to the Bruins. BYU is the last squad a team wants to overlook because Bronco Mendenhall’s team is tough — both physically and schematically — to play against.