Week 8 offers us a full slate of intriguing matchups as conference races start to heat up across the country.

A pair of marquee night contests highlight Saturday's action, which kicks off with a tricky road test for Oklahoma State in Columbia against Missouri.

Wisconsin (6-0, 2-0 Big Ten) at Michigan State (5-1, 2-0 Big Ten): The Badgers will take part in their second huge night game of the season, and we all remember how well Bret Bielema’s squad played in their first prime time affair — a thorough victory over Nebraska in Madison. This time around, Wisconsin hits the road and travels to East Lansing to face a Spartans team that is coming off of a strong performance against in-state rival Michigan, particularly on the defensive side of the ball. The Spartans are No. 2 in the nation in total defense, and they’ve recorded 21 sacks and 8 interceptions on the season. However, end William Gholston will miss the game due to his suspension for his actions last week against Michigan. That’s a big loss for the Spartans, so even more pressure will be on tackle Jerel Worthy to pace the front four. Their trio of linebackers will also have to continue to play outstanding, which they have been this fall without former standout Greg Jones, who moved onto the NFL.

How will the Badgers be able to run against the No. 2 rush defense in the nation? Montee Ball, who has found the end zone 16 times this year, and James White pace an always prolific rushing attack. And Heisman Trophy-contending quarterback Russell Wilson has given the team a dangerous additional threat on the ground, especially on roll outs after play-action. But is this the game where Wilson has to make more plays in the passing game? He’s been efficient through the air thus far, but he has never had to carry the Badgers. Will the MSU defense make Paul Chryst’s offense one-dimensional? Receiver Nick Toon is expected to play for the Badgers after missing last week with an injury, so his presence will be a boost. 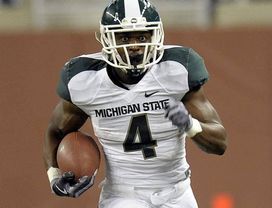 Edwin Baker will need to pace a strong Michigan State rushing attack if the Spartans want to knock off Wisconsin.

Michigan State, meanwhile, needs to be able to run the ball effectively itself. Edwin Baker stepped up last week against the Wolverines, and head coach Mark Dantonio cited the improvement of the offensive line as a major reason for the strong day against Michigan. And as I’ve mentioned before in this Saturday column, the Spartans' offense is predicated on Cousins’ ability to effectively utilize the play-action and hit receivers B.J. Cunningham and Keith Nichol in the passing game. That aspect of the offense was taken away from them in the loss at Notre Dame earlier in the year.

The Badgers have seen a blitzing defense before — Nebraska gave them some trouble by sending extra attackers earlier this season — so they will be aware of the Spartans’ blitzing tendencies. MSU has been very stout defensively on third down, so staying out of third and long will be key for Wilson and Co. However, the Badgers are one of the best in the nation converting on third down, and their success rate has largely been because of such an effective rushing attack.

Certainly, the Wisconsin ground game against the MSU front seven will be the most important “game within the game” Saturday night in East Lansing.

NCAA '12 simulation results: The NFP did a simulation of this game, as well as the USC-Notre Dame matchup. The PS 3's forecast? A 36-30 Michigan State winner. Kirk Cousins threw for 285 yards and three touchdowns, while Russell Wilson threw for two scores but also had two interceptions in the Badgers loss.

Auburn (5-2, 3-1 SEC) at LSU (7-0, 4-0 SEC): Clint Moseley will get his first career start in place of Barrett Trotter, who started the first seven games of the season for Auburn. Expect a lot of Kiehl Frazier in this game, as well, as coordinator Gus Malzahn looks for any and every possible way to move the football against John Chavis’ defense, which is arguably the best in the nation. LSU ranks 15th in the nation against the pass, so expect a healthy dose of Michael Dyer and Onterrio McCalebb. The problem is that LSU knows how to shut down the run, as well, as Chavis keeps rotating fresh bodies in along that defensive line throughout the game. Although cornerback Tyrann Mathieu will miss the game because of his one-game suspension, it’s hard to imagine Auburn moving the ball through the air against Morris Claiborne and Co. And Auburn receivers Travon Reed and Emory Blake are questionable for this game, as well, so it could be a long day for Malzahn’s offense. Unless Tre Mason has a huge day returning kicks, I’m not sure how many points that Auburn offense can score in Death Valley. 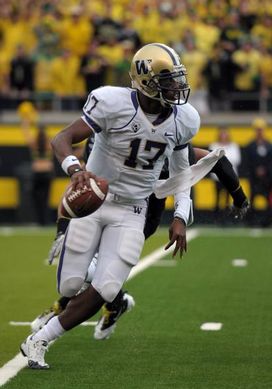 Washington (5-1, 3-0 Pac-12) at Stanford (6-0, 4-0 Pac-12): The Huskies entered the Top 25 this past week, as Steve Sarkisian’s squad has been playing excellent football offensively under the direction of quarterback Keith Price, who has thrown 21 touchdowns against just 4 interceptions while completing nearly 70 percent of his passes. Washington has the talent to keep up with the Cardinal offensively, but will Nick Holt’s defense be able to make enough stops against Andrew Luck, Stepfan Taylor and Co.? Luck has lost just one time in Palo Alto during his career, so the Cardinal attack will be tough to stop. The Huskies do possess a big-play defense, however, so forcing turnovers is key for Holt’s unit if they want to spring the upset. The problem is that Stanford doesn’t turn the ball over too easily. I still contend that the loss of Shayne Skov will hurt the Cardinal down the line, but Chase Thomas continues to do an excellent job leading a defense that has registered 23 sacks on the year.

Oklahoma State (6-0, 3-0 Big 12) at Missouri (3-3, 1-2 Big 12): The Tigers have dealt with some tough losses this season — an overtime road loss to Arizona State, a 10-point defeat at Oklahoma and a road loss to Kansas State. But they can turn around their season with a win over the Cowboys, a Top 5 BCS squad. Henry Josey, who is ninth in the nation in rushing and averages 9.7 yards per carry, leads a deep Tigers backfield. And he also returns kicks — and a big return could swing the momentum in this Big 12 contest. Mizzou quarterback James Franklin, however, must have a turnover-free game, because the Pokes have 12 interceptions on the season. Oklahoma State has a “bend but don’t break” defense that relies on the big play. The Tigers must be able to control the ball because they don’t want their defense to constantly be on the field defending Brandon Weeden, Justin Blackmon and Joseph Randle. This game is a noon ET kickoff, so expect it to pave the way for what could turn out to be one of the more exciting Saturdays of the season.

USC (5-1) at Notre Dame (4-2): Last season, the Fighting Irish snapped their eight-game losing streak to the Trojans. On Saturday, Notre Dame will be hosting its first night game in 21 years. Brian Kelly’s squad is coming off of a bye week, and they are unquestionably playing their best football of the season. It will be interesting to see if star receiver Michael Floyd gets a chance to return punts, as he’s been working at fielding footballs as the Irish look to generate better production in the punt return game. Meanwhile, the Trojans have serious issues at running back and cornerback. Marc Tyler is out with a dislocated shoulder, Anthony Brown is out for the year and Torin Harris may not play against the Irish either. Matt Barkley and Robert Woods may connect for a score or two, but coordinator Bob Diaco’s defense will make things hard on the Trojans’ offense — especially without a dependable running game. 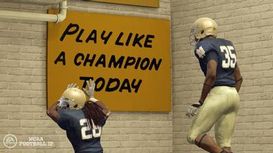 Will Notre Dame play like a champion against USC?

NCAA '12 simulation results: When these two teams squared off on the PS 3, USC scored a 41-34 victory behind five touchdowns from Matt Barkley. Tommy Rees threw for a whopping 495 yards and three scores, but he also tossed two picks in the defeat.

Have a great weekend. Enjoy all the games Saturday, and have a blast watching my Detroit Lions get back into the win column and move to 6-1 with a victory over the Atlanta Falcons.