This was the date the entire college football world circled on the calendar when the 2011 season began. And with every LSU and Alabama win, the anticipation mounted.

Week 10 of the season is here, and the Tigers and Crimson Tide are ready for an important prime time battle at Bryant-Denny Stadium in Tuscaloosa.

A full slate of intriguing matchups is on tap Saturday as conference races continue to heat up across the country, so dust off that grill and get it fired up because we’re ready to start this weekend’s tailgate.

Assuming it takes care of business the rest of the way in SEC play — including the conference championship game — the winner of the LSU-Alabama showdown will play for the BCS national championship. Many feel that even the loser could sneak its way into the title game if it’s a close loss — especially if it’s the road Tigers — but that scenario is unlikely and not worth contemplating at this point.

These two squads are clearly the class of the SEC and — despite the impressions made by Stanford and Oklahoma State this season — the class of the nation. If you missed my post from Wednesday on the “3 things to watch” in this contest, you can check it out here. But there are two more areas to keep an eye on in this one that I am certainly interested in monitoring. 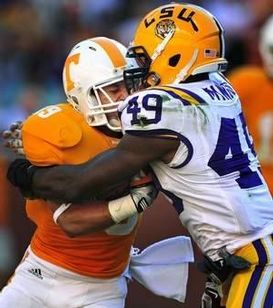 Can Barkevious Mingo and the Tigers get to 'Bama QB AJ McCarron?

Alabama offensive tackles vs. LSU defensive ends: In the Tide’s contest against Florida, quarterback AJ McCarron felt pressure off the edge from the Gators defensive ends. Tide tackles Barrett Jones and D.J. Fluker will have their hands full against the Tigers ends in this one, particularly Sam Montgomery and Barkevious Mingo. McCarron arguably had his poorest showing of the season in that win against UF, as he completed only 48 percent of his passes. While the Tigers may have some issues defending Trent Richardson and the Tide rushing attack, there’s no question that they will pose problems against the pass. ‘Bama must stay out of third and long situations, especially because of LSU’s depth along the front four.

The trick play/big turnover: When a game is so evenly matched as this one, usually a trick play or a key turnover makes the difference in the outcome. Last season, LSU claimed a 24-21 victory in Baton Rouge by employing its typical Les Miles magic. The Tigers used a tight end reverse on fourth down that helped sway the momentum in their favor to give them their first win over ‘Bama since 2007. Will Miles magic win out again? Or will one of the dominant defenses force a big turnover deep in enemy territory, leading to an easy score for the offense?

We’ll see how it plays out when the teams finally take the field after an entire season of anticipation. Let’s hope that the game lives up to all of the hype. But if it doesn’t, we’ll certainly still have a lot to talk about with our friends at Sunday morning brunch.

Remember the “Game of the Century” in 1971 between Nebraska and Oklahoma? Unfortunately I have only been able to see the 35-31 Cornhuskers win on replay and read about the buildup, but that is the game that every other big-time matchup has been compared to over the last 40 years. Steve Greenberg of Sporting News takes a look at the top 10 regular-season No. 1 vs. No. 2 matchups since that Huskers-Sooners clash.

<p> Texas A&M at Oklahoma: The Sooners made a nice move up the BCS standings after suffering their first defeat of the season two weeks ago at home against a Texas Tech team that fell to Iowa State last week. OU bounced back in a big way at Kansas State and is positioned as the best one-loss team in America if it can take care of Oklahoma State in the Bedlam game and if Stanford falls to Oregon. Of course, then we’ll likely have an undefeated Boise State, a one-loss Oregon, a possible one-loss SEC West team, etc. Cue the playoff chatter.

South Carolina at Arkansas: The Razorbacks have struggled in the first halves of their last two contests against Ole Miss and Vanderbilt but have found a way to bounce back and remain a player in the BCS race. At some point, will that slow start come back to haunt Bobby Petrino’s squad? Meanwhile, Gamecocks quarterback Connor Shaw will have to play his best game of the season against the Hogs. We may just see how much Steve Spurrier’s team misses stud running back Marcus Lattimore in this one.

Kansas State at Oklahoma State: The Cowboys have moved up to No. 3 in the BCS standings, and running back Joseph Randle has given the Pokes balance on offense all season — when they decide they want to run the ball. Bill Snyder’s Wildcats, meanwhile, could see a repeat of last Saturday.

Oregon at Washington: Will Darron Thomas or Bryan Bennett get the call at quarterback for the Ducks? Chip Kelly wants to make sure his offense is running at peak efficiency as the Ducks head down the stretch, so keep an eye on the injured knee of Thomas if he gets the nod. Meanwhile, Huskies quarterback Keith Price could give the Ducks’ defense fits.

Michigan at Iowa: Could the Hawkeyes bounce back from their terrible loss to Minnesota?

Texas Tech at Texas: Will the Red Raiders produce a better showing than the one last week against Iowa State? Quarterback Seth Doege led the team to an upset in Norman and will look to do the same in Austin.

Louisville at West Virginia: Charlie Strong’s Cardinals have won back-to-back games, while Dana Holgorsen’s Mountaineers look to assert themselves as the best team in the Big East.

Have a great weekend. Enjoy all the games Saturday, and have a great time watching all of the NFL action on Sunday. My beloved Detroit Lions have the week off.

Check out the latest college football news under the College Football Report column.