The summer is almost over, which means we are ever so close to the start of the 2012 college football season.

With that in mind, let’s take a look at the National Football Post’s preseason Top 25.

Of course, until head coach Nick Saban’s squad loses a game, defending BCS national champion Alabama headlines the list. However, if I was to project a title matchup at this point, I remain a lean on LSU-Oklahoma.

1. Alabama: The Crimson Tide lost a ton of talent on defense to the NFL, including Mark Barron, Dre Kirkpatrick, Dont'a Hightower and Courtney Upshaw. But running back Eddie Lacy and quarterback AJ McCarron will lead a stronger offense, which will feature more production at the receiver position. 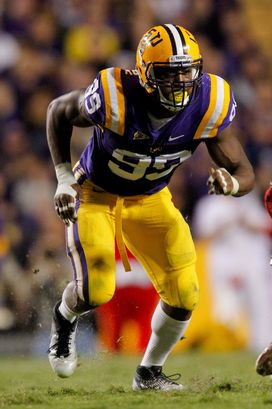 2. LSU: Former Georgia quarterback Zach Mettenberger has shown in spring drills and preseason scrimmages that he is ready to step in for Jordan Jefferson and Jarrett Lee. And the Tigers return a lot of their deep and talented defense, including dominant ends Sam Montgomery and Barkevious Mingo.

3. Oklahoma: Veteran quarterback Landry Jones will be able to rely on a set of receivers, led by Kenny Stills, that was boosted by freshman Trey Metoyer and Penn State transfer Justin Brown. But new defensive coordinator Mike Stoops must help shore up a talented yet disappointing defense, particularly the secondary.

4. Oregon: Ducks head coach Chip Kelly has a tough decision to make at quarterback, where Marcus Mariota and Bryan Bennett are locked in a tight battle. But no matter who starts at quarterback, the offense will run efficiently with Kenjon Barner and De’Anthony Thomas able to pick up the slack with LaMichael James gone. Defensively, coordinator Nick Aliotti’s unit really grew up in the second half of 2011.

5. USC: The Trojans have a Heisman Trophy-contending quarterback, two 1,000-yard receivers and two 1,000-yard rushers. They have a ton of starters back from a team that was playing as well as any squad in the country, with the exception of LSU and Alabama, by the end of the 2011 season. Monte Kiffin’s defense was much improved in his second season running the unit, but it can still make a jump. Depth and pass-rushing could be a concern.

6. Arkansas: Quarterback Tyler Wilson and a healthy Knile Davis at running back will help the offense maintain its high-scoring ways under offensive coordinator Paul Petrino. Home games against Alabama and LSU should have Razorback fans excited, but all eyes will be on John L. Smith, who will coach the Hogs in 2012. And the defense needs to be improved under Paul Haynes.

7. Virginia Tech: Quarterback Logan Thomas is primed for a huge year if Marcus Davis emerges as a No. 1 receiver and the offensive line gels. The Hokies always have a running back to step up when a star moves on, and that could very well be Michael Holmes. Defensive coordinator Bud Foster will return his entire front seven, and the Hokies’ toughest non-conference games are against Pittsburgh and Cincinnati. The schedule is the reason why the Hokies could find themselves in another BCS bowl game at the end of the year.

8. South Carolina: Gamecocks head coach Steve Spurrier finally found a quarterback he’s comfortable with in Connor Shaw, and Marcus Lattimore will continue to run the football with great effectiveness after healing from his knee injury. Defensive lineman Jadeveon Clowney is ready to become even more beastly, which is a scary thought for opposing SEC O-Linemen. This is arguably the Head Ball Coach’s best team since his arrival in Columbia.

9. Michigan State: The Spartans will once again have one of the best defenses in the nation under coordinator Pat Narduzzi, and LeVeon Bell will pace a strong rushing attack. The biggest question will be how Andrew Maxwell responds to adversity after taking over for veteran Kirk Cousins under center. All of the talk coming out of East Lansing is that Maxwell is ready to be the leader of this offense.

10. Georgia: The Bulldogs return much of the team that ran off 10 straight wins after an 0-2 start in 2011. Most importantly, they have a 3-4 defense that was one of the best units in the nation, led by linebacker Jarvis Jones. However, the secondary will be extremely thin early in the season because of suspensions, and the rebuilt offensive line must gel right away. A tricky game awaits in the SEC opener in Week 2 at Missouri.

11. West Virginia: Geno Smith showed how comfortable he is in Dana Holgorsen’s offensive attack in an Orange Bowl thrashing of Clemson, but how will the Mountaineers adjust to life in the Big 12? They should seamlessly ease into their new league, but will their transition from a 3-3-5 to a 3-4 with 4-3 looks be smooth?

12. Clemson: The Tigers should be even more efficient offensively in the second year under coordinator Chad Morris. There’s material on defense, but consistency is the key. And that's what new Tigers defensive coordinator Brent Venables will have to make happen in order to claim another ACC crown.