No quarterback separation in Austin

Once again, Texas has quarterback issues.

Head coach Mack Brown has yet to name a starting quarterback for the Longhorns' season opener against Wyoming, as David Ash and Case McCoy continue to battle for the job in preseason drills. And Brown pretty much confirmed that he doesn't expect either signal-caller to separate himself from the pack any time soon despite having a full spring season, summer drills, 13 preseason practices and a 100-play scrimmage under their belts.

"Both know they're going to play," Brown told Kirk Bohls of the Austin American-Statesman. "We're in a better spot. We're not playing games." 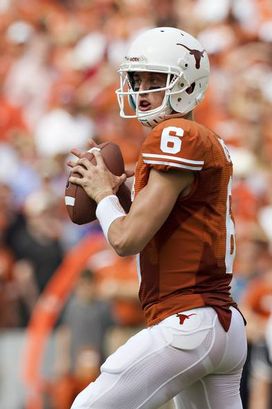 Case McCoy is in a tight battle with David Ash for the starting QB job at Texas.

Coming out of spring drills, it was assumed that Ash would be lining up under center in the opener after he took every snap in the team's Holiday Bowl win, earning MVP honors in the victory over Cal. However, he didn't exactly have a standout performance against the Golden Bears. And the true sophomore finished 2011 with four touchdowns against eight interceptions, so decision-making remains a major issue.

Brown and offensive coordinator Bryan Harsin obviously want to make sure a Plan B is in place this fall in case Ash doesn't develop as quickly as they would like. Keep in mind that when Garrett Gilbert failed last season, Ash and Case McCoy were overwhelmed. So McCoy remains in the mix and is getting a fair chance to win the job -- whether it's genuine or if the coaching staff has just been worried about a potential transfer.

Brown and Harsin obviously hope either Ash or McCoy outperforms the other and runs with the starting job. But what if the Longhorns don't see any separation? Could freshmen Connor Brewer and Jalen Overstreet be pressed into action?

It's likely that both freshmen would redshirt, particularly Brewer, who is nursing a sore ankle and just wouldn't seem like a viable option at any point this season. He is considered the future at the position in the eyes of many Longhorn fans, as the early enrollee won three straight state championships and went 41-2 as a starter in high school and is more polished than Ash was coming out of high school. Dual-threat Overstreet joined the team this summer and could be an option if Ash and McCoy struggle, which is a worst-case scenario.

No matter who is under center for the Longhorns, he must be able to help the team score points if it has any designs on capturing a Big 12 title. While the defense remains one of the best units in the nation under Manny Diaz, too often it was leaned on last year when the offense was stagnant. If that happens again in 2012, the Longhorns may be in for a disappointing campaign.