No separation in Florida's QB battle

Like Texas, Florida will not be able to return to elite status nationally unless it gets better play from the quarterback position.

And if preseason camp is any indication, it could be another disappointing year in Gainesville. 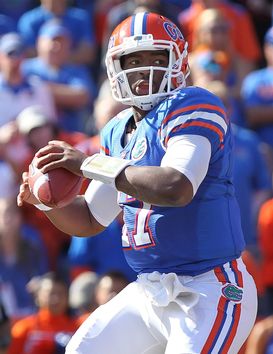 US PRESSWIREJacoby Brissett is battling Jeff Driskel for the starting QB job at Florida.

Head coach Will Muschamp has yet to name a starting quarterback for the team's season opener September 1 against Bowling Green, as true sophomores Jacoby Brissett and Jeff Driskel continue to battle for the starting job. And, as Robbie Andreu of the Gainesville Sun reports, the former Texas defensive coordinator does not expect to name a starter until game week.

The pair of young signal-callers will have one more week of practice and a final scrimmage to impress Muschamp and new offensive coordinator Brent Pease, who replaced Charlie Weis this past offseason.

"We'll see what happens," Muschamp said of the battle under center. "I'm not ready to comment on that. I think we have a press conference Monday of game week. We'll see Monday [Aug. 27]."

Neither quarterback has drawn rave reviews in camp, including an open practice at Florida Field on Saturday. Michael DiRocco of ESPN.com's GatorNation blog reports that neither QB has been consistent completing intermediate passes, having trouble in the scrimmage with throwing passes 10-20 yards during 11-on-11. Part of this was because of subpar play from the receivers, as well.

The lack of game-breaking players at the receiver position has been overshadowed the last few seasons by the QB play, but there's no question that the team needs consistent playmakers to emerge at the surrounding skill positions no matter who is under center for the Gators or else it will be another disappointing season at The Swamp.