Besides the South Beach player-agent scandal, the absurdity of Oregon’s offense and the recent Cam Newton drama, much of the discussion surrounding the 2010 college football season has revolved around the non-AQ’s and how they fit into the BCS equation.

ICONIs Boise State still the darling of the non-AQ teams?

Coming into the season, many wondered whether this was the year Boise State received its shot in the BCS title game. Then, after its dominating win over Utah last week on the road, TCU began to stake its claim to the best non-BCS team in the land.

While schools from BCS conferences will always receive the most pub, it’s nice to recognize some teams having very good seasons that otherwise would go unnoticed.

In case you missed it this past Tuesday night, Northern Illinois remained unbeaten in the Mid-American Conference with a 65-30 thrashing of Toledo, which came into the game unbeaten in league play, as well. The Huskies built a 28-0 halftime lead and never looked back, moving to 8-2 on the season. NIU is just one team that is playing an exciting brand of football this year that may have gone unnoticed if not for the Tuesday showcase.

Let’s take a look at some other solid programs going under the radar.

Note: Because we’ve seen TCU and Boise State enjoy the national spotlight this season — and, to an extent, throughout the BCS era — we’ll leave those teams out of this because we know how good they are. And despite its rough home loss to the Horned Frogs last week, Utah will also be left out because we’ve seen how good of a program that has been since Urban Meyer was in Salt Lake City.

Northern Illinois (8-2, 6-0), MAC: The Huskies are now in complete control of the West division of the MAC with its victory over Toledo. The Huskies essentially have a two-game lead because of the head-to-head factor, and they’re on a seven-game winning streak — the longest since 2003. The tradition of very good running backs continues in DeKalb, as MAC leading rusher Chad Spann paces an attack that ranks 11th in the nation, averaging 260 yards per game. Spann already has 15 scores after finding the end zone 19 times last season. The league’s highest-scoring offense is run by signal caller Chandler Harnish, who has tossed 12 touchdown passes against just four interceptions. The dual threat has also gained 559 yards on the ground and found the end zone four times. Third-year head coach Jerry Kill has brought over his winning ways from Southern Illinois, leading the Huskies to two bowl bids in his first two seasons on the job. The least penalized team in the MAC is stingy and sound on defense, and they possess wins over Minnesota and Temple on the season. A berth in the Little Caesars Bowl is likely. 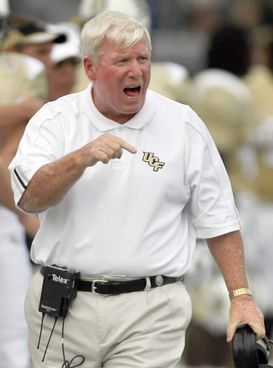 Central Florida (7-2, 5-0), C-USA: Might George O’Leary’s Knights be on the move to the Big East? It is a definite possibility, as the UCF program is on the rise under the former Notre Dame head coach. Yeah, technically, he goes down in the books as a former coach of the Fighting Irish. O’Leary has the Knights sitting undefeated in C-USA and ranked for the first time in school history. UCF has won five consecutive games, and they’ve won in dominating fashion. On offense, the Knights love to pound the rock down the opponents’ throat. They are averaging 203 yards per game on the ground and have scored 26 of their 35 touchdowns via the run. Ronnie Weaver leads the team with 10 rushing touchdowns, and dual-threat signal caller Jeff Godfrey has rushed for 499 yards and six scores. While he’s a better runner than passer, the freshman has a bright future under center. However, defense is the Knights’ calling card. The unit is holding opponents to 18.7 points per game and has been very stingy against the run all season. Making UCF even more dangerous is a secondary that continues to improve. A Liberty Bowl bid may be on the horizon for this potential Big East member.

San Diego State (7-2, 4-1), MWC: What a coaching job by Brady Hoke with the Aztecs. If you get the chance to check out San Diego State this weekend at TCU, please do so. The former Ball State boss took the job following a 2008 season in which he led the Cardinals to a 12-1 mark. In his second year on the job, he now has the Aztecs bowl eligible for the first time since 2003, and their seven wins already outnumber the six they managed in 2008 and 2009 combined. Led by dynamic freshman running back Ronnie Hillman, the Aztecs are averaging 33.7 points per game — a huge jump from the 15.2 ppg posted the year before Hoke arrived. Gone is the spread brought in by Chuck Long, as Hoke now runs a pro-style attack. Quarterback Ryan Lindley has improved, but the real story is the speedy Hillman and the defense. The freshman has piled up 1,044 yards and 12 touchdowns on the ground, and he is being likened to former Aztec Marshall Faulk. The defense, meanwhile, has improved its ranking from 113th to 33rd nationally. A date with Navy in the Poinsettia Bowl may loom. What a story for Hoke and the program.