Today, we'll take a look at non-BCS teams after looking at the SEC last Monday, the Big Ten on Tuesday, the Pac-12 on Wednesday, the Big 12 on Thursday, the Big East/American Athletic Conference on Friday and the ACC yesterday.

1. Notre Dame: The Fighting Irish will continue to be stout defensively with Stephon Tuitt, Louis Nix III and Prince Shembo leading the way. Offensively, ND must adjust its offense a bit now that Everett Golson is no longer on campus. But it's hard to find another head coach that has won more with quarterback instability than Brian Kelly.

2. Northern Illinois: The Huskies continue to be led by Jordan Lynch, a dual-threat quarterback who should have received even more pub than he did in 2012. NIU will have a chance to show its staying power when it faces Big Ten foes Purdue and Iowa this fall. Even without former head coach Dave Doeren, this team is the class of the MAC. 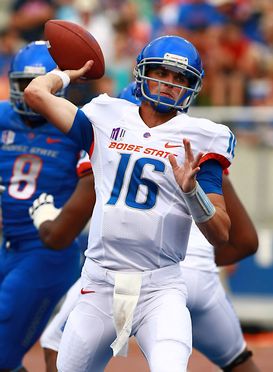 US PRESSWIREJoe Southwick protected the football better towards the end of the 2012 campaign.

3. Boise State: The Broncos open the season against Washington, so we'll get an early indication of whether quarterback Joe Southwick will be able to improve on his game from 2012. Boise State was strong against the pass and No. 8 in scoring defense last season, but replacing Jamar Taylor and Jerrell Gavins at cornerback will be difficult.

4. BYU: The Cougars are in good hands offensively with dual-threat quarterback Taysom Hill, and he should excel in the new up-tempo offense. Defensively, linebacker Kyle Van Noy leads what should once again be a strong unit.

5. Fresno State: The Bulldogs are led by Derek Carr, who threw for 4,104 yards and 37 touchdowns against seven interceptions last fall. Fresno State opens with Rutgers at home, so the Bulldogs will have a chance to earn national attention right away.

6. Toledo: The Rockets visit Florida in the season opener, so hanging around into the second half would be considered a moral victory. Quarterback Terrance Owens and running back David Fluellen will lead an outstanding offense.

7. Tulsa: The Golden Hurricane lost eight defensive starters from last year's team, but they lost only three starters on offense. However, all-Conference USA tackles Jared Grigg and Brian DeShane are gone, so stabilizing the offensive line will be key.

9. Western Kentucky: The big question is how long new head coach Bobby Petrino will last with the Hilltoppers before moving onto a more high-profile gig. In terms of the offense this fall, Petrino inherits big, strong running back Antonio Andrews and a deep receiving corps.

10. San Diego State: Rocky Long brought in Bob Toledo as the new offensive coordinator, and the scheme is similar to what the Aztecs have run in the past. Look for the unit to be more creative under the former UCLA head coach, so returning starting quarterback Adam Dingwell should have plenty of opportunities to succeed.