North Carolina’s emotional 37-35 win at Florida State on Saturday night came at the expense of Johnny White, who fractured his right clavicle in the first half and will miss the rest of the season. 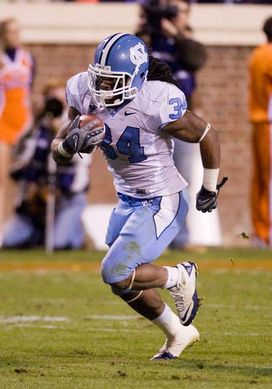 ICONNorth Carolina senior RB Johnny White will miss the rest of the season.

The 5-11, 200-pound senior was tackled by linebacker Nigel Bradham following a 12-yard reception, and Bradham landed with all his weight on White's right shoulder, breaking his collarbone.

With the loss of their leading rusher, the Tar Heels have now lost a total of 31 scholarship players for at least one game this year — 17 because of injuries and 14 due to the NCAA investigation regarding allegations of academic misconduct and athletes receiving improper benefits.

The senior tailback, who led the team with 720 yards on the ground and was UNC’s third-leading receiver with 24 catches for 288 yards, ranks fourth in the ACC in all-purpose yards with an average of 112 per game. He finished the year with a team-high seven touchdowns.

Shaun Draughn likely will become the lead back, but it'll be interesting to see if Ryan Houston emerges as an option for head coach Butch Davis.

Even despite its serious personnel issues throughout the season, UNC (6-3, 3-2) remains in the mix for the Coastal division title entering Saturday’s home game against Virginia Tech (7-2, 5-0).