The first Sunday of the NFL season wasn’t even two hours old yet when the Detroit Lions were potentially forced into 2011 mode.

That’s what happens when your franchise quarterback — the one who represents hope and resurrection for a team and a city — goes down with an injury that could set back a rebuilding process that looked as if it was beginning to make progress.

Matthew Stafford injured his right (throwing) shoulder in the final minute of the second quarter of Sunday’s opener against the Bears in Chicago when he was blind-sided and strip-sacked by defensive end Julius Peppers. Stafford clutched the shoulder — the same one he injured last season — as soon as he hit the ground and spent the rest of the half with his jersey off on the Lions sideline.

While the extent of the injury is unknown at this point, Stafford did not return to the game. Backup Shaun Hill played the entire second half. 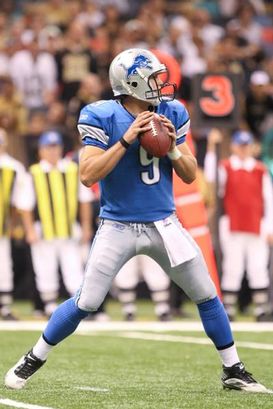 ICONMatthew Stafford was knocked out of the season opener against the Bears with a shoulder injury.

Whether or not the Lions could have pulled out the win against the Bears if Stafford was on the field, we’ll never know. Actually, the Lions did beat the Bears when Hill hit Calvin Johnson in the end zone in the waning seconds — but that’s another story. I never knew the word “process” was necessary to justify a touchdown call.

Anyway, the real story is how the Lions move forward if Stafford is forced to miss a significant amount of time. If the second-year signal caller from Georgia, who was shelved last season with a shoulder injury, needs to go under the knife, Detroit’s rebuilding effort will be stalled.

And even then, will the Lions know exactly what they have at the quarterback position? It seems as if we have seen Stafford on the sideline with his shoulder wrapped or in street clothes much more frequently than on the field with his helmet and pads on.

For those wondering if Stafford was damaged goods coming out of college, he wasn’t. He consistently lined up under center in Athens for the Bulldogs, as durable a quarterback for three years as you could have found in the SEC.

Whether it’s a product of an offensive line that hasn’t been strong since the days of Kevin Glover and Co. — and even then the unit wasn’t great — or it's just a case of bad luck, the fact is that Stafford continues to get banged up. While we have seen glimpses of his immense talent, firm control of the huddle and good grasp of the offense, we haven’t seen enough. And if he misses significant time the rest of this season, the Lions will go into Year Three of the Jim Schwartz era with questions under center — exactly what wasn’t expected to happen with Stafford seemingly set to make big strides in his second season in an offense with more weapons.

Perhaps the injury won’t turn out to be too serious and the young quarterback will be back in action sooner than later. But Stafford’s body language on the sideline certainly didn’t look great.

And if Hill is forced to lead this offense for a good portion of this season, the road back to respectability for this team will take an unfortunate detour — and leave unanswered going into 2011 many of the questions surrounding this team heading into Sunday’s opener.