Notre Dame gets pledge from five-star running back

Notre Dame landed its eighth and most high-profile commitment in its Class of 2014 on Sunday when running back Elijah Hood gave a verbal pledge to the Fighting Irish. 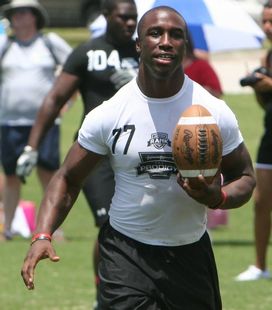 Charlotte RB Elijah Hood has given a verbal pledge to Notre Dame.

The 6-foot, 220-pounder from Charlotte Catholic High School (Charlotte, N.C.) is ranked as a five-star talent and No. 1 at his position nationally by Rivals.com. He made his pledge on Twitter after a weekend visit to South Bend.

Hood is ND's first five-star commitment in the current cycle, and it's a big "get" for Brian Kelly and Co. after losing prized running back Sony Michel to Georgia. He said he will play running back for the Irish after previously being recruited at both running back and linebacker by a number of schools.

The Charlotte product chose the Fighting Irish over his other top choice, North Carolina. Georgia and Virginia Tech were also in the mix, and he also held offers from top programs such as Clemson, Florida State, Michigan and Ohio State.

Last season Hood rushed for 3,309 yards and scored 48 touchdowns as his team finished as state runners-up. Over the past two years, Hood has rushed for 5,291 yards and 83 scores.