Notre Dame loses third player from its Class of 2012

Not long after quarterback Gunner Kiel decided to transfer out of Notre Dame, wide receiver Davonte Neal has decided to leave the program after one season as well, as first reported by Jason Sapp of Blue and Gold Illustrated. 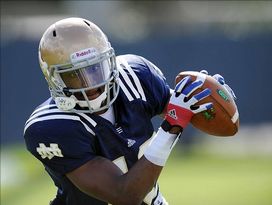 The highly touted rising sophomore, who will join Kiel and cornerback Tee Shepard as Class of 2012 recruits that decided to leave South Bend, recently became a father and was hopeful that his longtime girlfriend could move to South Bend. However, he reportedly decided that it would be better if he transferred to a school closer to his family.

After sitting out the 2013 season, Neal could land at a Pac-12 school. Keep in mind he was very close to choosing in-state Arizona in his initial recruiting process.

With TJ Jones expected to work more in the slot for the Irish in 2013 with Robby Toma moving on, Neal's biggest impact was expected to come on special teams as a punt returner, a position the Irish have lacked production from in recent years. Neal had 21 punt returns for 46 yards (with a long of 11 yards) last fall.

The slot receiver position in head coach Brian Kelly’s offense has not been as productive as many had expected, so I'd expect Jones to be more of a fixture there now, especially with the emergence of sophomore Chris Brown and junior DaVaris Daniels on the outside. Daniel Smith and running back Cam McDaniel also could get reps inside along with Jones.

But the major question now for the Irish is who will take over punt-returning duties in Neal's absence?