Let's take a look at some of the storylines that will play out over 15 practices as the Fighting Irish prepare for their spring game on Saturday, April 21.

Kelly has not put a timetable on naming a starting quarterback, and all four contenders will have an "equal opportunity to compete for the position" this spring, according to the Fighting Irish head coach at his news conference Tuesday. Incumbent starter Tommy Rees will have his work cut out for him despite having 16 starts under his belt as he battles rising junior Andrew Hendrix, soon-to-be sophomore Everett Golson and top Class of 2012 signal-caller Gunner Kiel for the gig. Here's what Kelly said about the position at his pre-spring presser:

"It's important that if they're all going to get an equal opportunity to compete for the position that they all have to start with a very similar knowledge base. We've kind of taken a step back and really looked at our offensive structure, and we're going to make it so all four of the guys that are here can compete at a fair level, because Tommy has got, as you know, the best knowledge base. But if we started the spring with page 50 of the playbook, Tommy would be ahead of everybody. 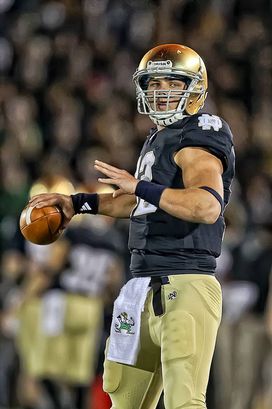 ICONCan Andrew Hendrix fend off three others for the starting QB job in South Bend?

"So not to put him at a disadvantage but to give it an equal footing for all, we've kind of scaled it back. So this spring, it's going to give all the quarterbacks, including a mid-year in Gunner and of course [Hendrix and Golson] an opportunity to truly compete for the position."

While he would like to have one QB stand out and be the true No. 1, Kelly has shown that he will utilize his "next man in" approach whenever necessary. It certainly should be an intriguing spring -- and likely fall camp as well. Kelly will place a premium on good decision-making and the ability "to keep plays alive with their feet." Rees isn't the most mobile of the bunch -- that would be the athletic Golson, who could be ready to make a strong impression. Hendrix may be ready after seeing his reps increased toward the end of last season. Or can Kiel, the former Indiana and LSU commit, absorb the playbook quickly, adjust to college life and be ready to start as a true freshman?

As I mentioned in my Four-down territory piece on Tuesday, the loss of early enrollee cornerback Tee Shepard was a huge blow to Notre Dame's secondary. So one of defensive coordinator Bob Diaco's biggest issues this spring is finding out who could possibly handle the top two cornerback positions after losing starters Gary Gray and Robert Blanton from last season. Neither Bennett Jackson, Lo Wood, Josh Atkinson nor Jalen Brown -- the four corners vying for two starting spots -- have started a college game, but Jackson and Wood combined to play in 23 games in 2011 and are the likely starters as of now. The late commitment of Davonte Neal could be the team's saving grace. While Neal was projected to make an impact at receiver, his career could begin on the defensive side of the ball where he seemingly is needed now more than ever.

• Transfer Amir Carlisle, who will be able to play immediately in 2012 after receiving an NCAA waiver, will not participate in spring drills. The former USC running back broke an ankle last week during a voluntary 7-on-7 drill. Carlisle rushed for 118 yards on 19 carries and caught seven passes for 41 yards and a touchdown as a freshman with the Trojans in 2011. Kelly said that Carlisle should be fully recovered by June.

• Defensive line will be an all-sophomore affair on the first team, as ends Aaron Lynch and Stephon Tuitt will be joined by nose guard Louis Nix.

• Troy Niklas has moved from linebacker to tight end, and it makes sense considering he's 6-7 and 252 pounds.

• Keep an eye on DaVaris Daniels, a receiver who arrived in South Bend with great fan fare. With Michael Floyd moving onto the NFL and Deontay Greenberry switching his commitment to Houston on National Signing Day, Daniels could move up a receiver depth chart that features Robby Toma, TJ Jones and John Goodman.

• Theo Riddick will see work returning punts along with Goodman. Kelly said that incoming freshmen Davonte Neal and C.J. Prosise could also see action on punt returns when they arrive on campus.

• Nose guard Tony Springmann had an offseason back procedure and will be limited this spring.