Not only will Notre Dame be breaking in a new starting quarterback in its season opener against Navy, but the team will also have a new running back in the starting backfield. 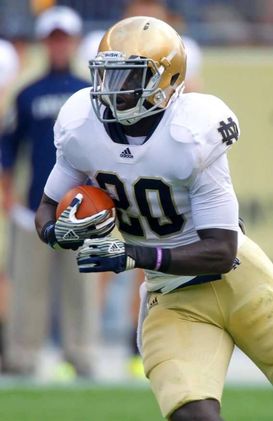 The pair will miss the Navy game as well as the team's home opener against Purdue. Of course, former starting quarterback Tommy Rees and linebacker Carlo Calabrese have also been suspended for the opener against the Midshipmen.

The 6-1, 215-pound Wood rushed for 1,102 yards and nine touchdowns last season, averaging 5.1 yards per carry. His combination of power and speed makes him one of the more productive backs in the nation entering his senior campaign.

The only saving grace for the Irish is that they have depth in the backfield. Look for multi-dimensional senior Theo Riddick and sophomore George Atkinson to get plenty of opportunities with Wood sidelined.