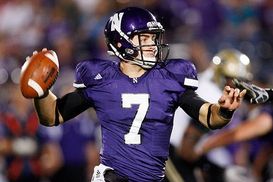 ICONDan Persa is one of the best dual-threat quarterbacks in the nation.

Wildcat fans in Chicago can see the ad next week on the Kennedy Expressway at Kimball Avenue while east-coast habitants can view it near the ESPN campus.

Northwestern officials chose the theme "Persa Strong" for the ads. If that motto rings a bell, it's because ESPN.com writer Bruce Feldman had named the 6-1, 210-pound signal-caller one of the strongest players in the nation. Persa can bench-press 360 pounds and squat 520.

School officials will also send 7-pound purple dumbbells to 80 members of the media to help Persa's cause for the award.

Persa was named to the coaches' All-Big Ten first team last season after throwing 15 touchdowns and running for nine more while completing a national-best 73.5 percent of his throws.