Yesterday at the NFP I offered five potential darkhorse teams that could make a run at the BCS national championship this fall.

One of the teams I left off of my list was Wisconsin, which is coming off back-to-back appearances in the Rose Bowl. However, the Badgers lost star quarterback Russell Wilson, who helped pace an explosive offense after arriving in Madison as a graduate transfer from N.C. State.

And if he returns to his 2010 form, the Badgers have a schedule that sets up fairly well for another Big Ten title run. And perhaps even more if the defense plays steady. 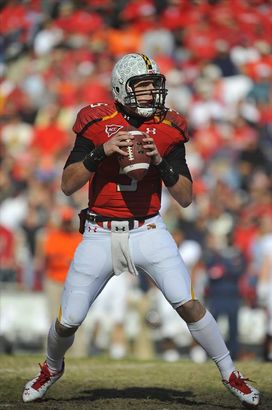 ICONDanny O'Brien was not a perfect fit in Maryland's spread attack last fall.

The athletic O'Brien took a step back last season with the Terrapins after the program underwent a staff change. Following head coach Ralph Freidgen's dismissal and offensive coordinator James Franklin assuming the head coaching gig at Vanderbilt, new head coach Randy Edsall brought in Gary Crowton to run a spread offense. And it was apparent that O'Brien wasn't comfortable in the scheme, struggling a bit with his reads, especially early in the year. It also didn't help that top receivers Torrey Smith and Adrian Cannon moved onto the NFL, leaving big voids at receiver. O'Brien passed for 1,648 yards with 10 interceptions and seven touchdowns in nine games, losing his starting job to C.J. Brown before suffering a broken bone in his non-throwing arm in a loss to Notre Dame.

Before taking a step back last fall, however, O'Brien looked like one of the rising stars in college football. In his debut ACC campaign under Friedgen and Franklin, the 6-3, 215-pounder went 7-3 as a starter and passed for 2,438 yards with 22 touchdowns and eight interceptions. His efficiency rating of 134.5 ranked fifth nationally among FBS freshmen while running the Terps' pro-style offense. He looked poised to continue his success in College Park, but the change in offensive philosophy hurt his development.

Now in Madison, O'Brien unquestionably has upgraded the quarterback position for new offensive coordinator Matt Canada because outside of O'Brien there is so much uncertainty and a lack of experience at the position.

While we don't know exactly how the Wisconsin offense will look under Canada, who replaced new Pittsburgh head coach Paul Chryst, it will remain a pro-style system. And that should fit O'Brien well because his skill set is a perfect fit for a pro scheme. Head coach Bret Bielema is smart enough not to mess with a good thing, so expect plenty of Montee Ball and Co. on the ground running behind a strong offensive line. And expect O'Brien to have time to make plays down the field to his capable set of receivers when the opportunities arise.

Of course, the former Maryland starter still has to beat out redshirt freshman and former walk-on Joel Stave and former Wilson backup Joe Brennan this fall because he missed spring practice. But he's a smart player who would be able to pick up the offense quickly as Wilson did last year when he arrived late in the summer. The most important thing is he will be able to play immediately and he'd give the Badgers stability at the position because he has two years of eligibility remaining.

Wisconsin's Big Ten opener at Nebraska and league finale at Penn State are the only major conference road tests the team will face besides a tricky nonconference game at Oregon State early in the year. The Badgers get Michigan State and Ohio State at home, while they miss Michigan on the schedule. If O'Brien can revert back to his 2010 form when he was named the ACC newcomer of the year, the Badgers could find themselves back in the Rose Bowl. Or perhaps in the BCS national championship game.