While Matt McGloin will be Penn State's starting quarterback for its season opener, expect Paul Jones to see the field this fall.

And he could see plenty of action. 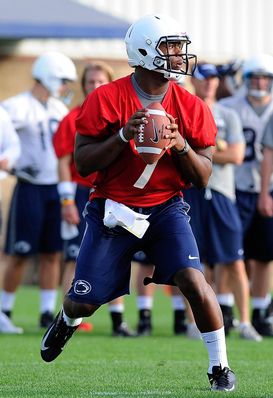 US PRESSWIREPenn State QB Paul Jones could be in line for regular playing time this fall.

Jones, who is more talented but less experienced than McGloin, failed to win the starting job during spring drills, but O'Brien likely tabbed McGloin as the No. 1 QB because of his veteran presence. But with McGloin in his final year and Jones possibly in line to start in 2013 — if he beats out top 2013 recruit Christian Hackenberg, who still could elect not to sign with Penn State because of NCAA sanctions — O'Brien is wise to get Jones reps on the field this fall.

McGloin has seen most of the first-team work this preseason, with Jones getting second-team looks and the occasional first-team reps. O'Brien wants to protect himself in case McGloin is injured, but perhaps the major reason why Jones will get some work with first-teamers is because he is the most athletic of the two signal-callers. And with O'Brien's new spread offense taking shape, Jones could have a unique role in special packages.

Keep in mind that Jones could have beat out Rob Bolden for the starting job in each of his first two seasons, but he was dogged by academic problems. He won't run as much as Bolden, but the redshirt sophomore is a good fit for O'Brien's offense because he has a better arm and could still move well.

The downside to bringing in Jones at times is disrupting the rhythm of the offense. McGloin stated this spring that being shuffled in and out last year affected the unit's productivity. So O'Brien will have to be careful in how he balances the workload of both signal-callers. But it definitely looks as if Jones will have every chance to be on the field this fall.