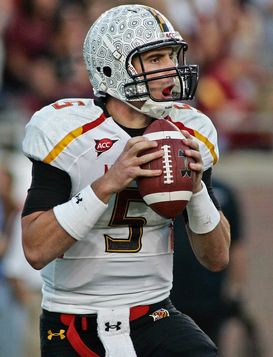 US PRESSWIREFormer Maryland starting QB Danny O'Brien is settling in well at Wisconsin.

Wisconsin won't have Russell Wilson back this fall, but head coach Bret Bielema imported another quality quarterback to take his place when he added former Maryland starter Danny O'Brien.

And the former Terp is fitting very well into Matt Canada's offense, according to Jeff Potrykus of the Milwaukee Journal Sentinel.

Potrykus writes that O'Brien has impressed in camp, especially the last few practices, and that he has looked sharp overall. And while Bielema hasn't officially named O'Brien the starter, there's no question that it's his job to lose.

“That was my goal, not to get down if you have a mistake, especially if it is the first or second time you’ve repped it. So I think as a team we’ve gotten better this week.”

O'Brien struggled in his second season as Maryland's starter as the team switched to a spread attack, but he should thrive in Wisconsin's pro-style attack, especially because the offense will look similar to those in years past despite former OC Paul Chryst moving on to become the head coach at Pitt.