The Will Muschamp era at Florida officially kicked off this past weekend, as the Gators held their Orange & Blue Debut spring game in Gainesville on Saturday before an announced crowd of 53,000 at Ben Hill Griffin Stadium.

The contest wasn’t exactly thrilling, with the Blue team claiming a 13-10 victory over the Orange team in a game that didn’t see its first touchdown until backup quarterback Tyler Murphy connected with walk-on running back Ben Sams for a 10-yard score in the fourth quarter.

The injury bug really bit the Gators throughout the spring, as evidenced by the fact that walk-on defensive back Malcolm Jones saw time at running back and some offensive linemen rotated between both teams.

The good news for UF fans, though, is that the 2010 season is officially behind them. The bad news? There’s still plenty of work to be done for Mushchamp and Co.

Let’s take a look at some spring game notes and see how the 2011 Gators are shaping up. 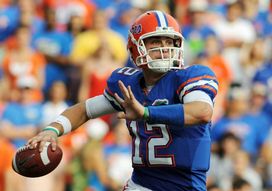 John Brantley didn't excite many fans with his play in Florida's spring game.

John Brantley’s first year as a starter under center didn’t go as smoothly as many had expected. But with new coordinator Charlie Weis taking over the offense from Steve Addazio, Brantley has a fresh start in a pro-style offense. The 6-3, 220-pounder, however, struggled on Saturday, as he failed to complete a pass in his first six attempts — two of which were swatted away at the line of scrimmage. The redshirt senior finished the day completing just 4-of-14 passes for 45 yards in one half of action.

Last season while running Addazio’s spread-option, Brantley threw for 2,061 yards with nine touchdowns against 10 interceptions, making him the first Gators starting signal caller to throw more interceptions than touchdowns since Kyle Morris in 1988.

On Saturday, he didn’t have much help from his offensive line, which was missing three starters (center Nick Alajajian and tackles Matt Patchan and Xavier Nixon), three receivers (Andre Debose, Trey Burton and Chris Dunkley) as well as four running backs (Jeff Demps, Mike Blakely, Mike Gillislee and Mack Brown). So there’s no question that the units pressed into action didn’t feature many of the team’s best players. But with a new coaching staff in place and a fan base pessimistic about his ability to lead the offense consistently down the field, Brantley still has a lot to prove despite being a dropback passer that fits the new offense.

The other two scholarship quarterbacks outperformed Brantley. Redshirt freshman Tyler Murphy recorded 68 yards and a score on 7-of-11 passing. The interception that he threw occurred when a pass bounced off the hands of the receiver. Meanwhile, highly touted early enrollee Jeff Driskel completed 3 of 8 passes for 29 yards. Driskel has all the tools to excel in this system, but it’s difficult to imagine him getting extended playing time early in the season. Dual-threat and native Floridian Jacoby Brissett will also join the competition when fall camp rolls around. 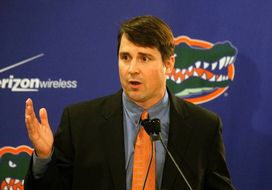 ICONWill Muschamp was impressed with the play of his young defensive line.

While Brantley sits atop the depth chart entering the summer, it’s still not a guarantee that he starts the opener against Florida Atlantic on Sept. 3. Muschamp has said he expects a great competition in the fall, so Brantley has work to do. But working in his favor is the fact that Muschamp has been pleased with how he’s picked up the new offense, and he mentioned that Brantley has completed nearly 70 percent of his passes throughout spring drills.

The line gets defensive

The Gators may be young across the defensive line, but this unit has progressed nicely and made its presence felt on Saturday. Led by Sharrif Floyd and Dominique Easley, the line looked physical and fast off the line and helped make Brantley and the other signal callers uncomfortable in the backfied. Floyd tied for the team lead with four tackles — three of them for a loss — as the Gators displayed a good four-man rush. Along with fellow sophomore Ronald Powell, Floyd and Easley carry big expectations after coming to Gainesville as top recruits in 2010. Muschamp knows that the three defenders can have a big impact if they stay hungry and continue to work hard.