Before this offseason turns into the 2013 preseason when camps begin in August, let's take a look at the programs that had the best and the worst offseasons due to a variety of factors: off-the-field arrests or suspensions, recruiting troubles, injuries, etc. 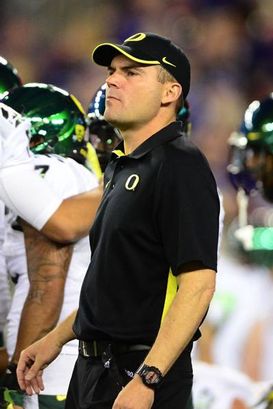 US PRESSWIREMark Helfrich and the Ducks won't face serious sanctions.

Oregon: Mark Helfrich's debut campaign as Oregon's head coach will not be marred by a postseason ban, as the NCAA's Committee on Infractions let the Ducks off easy following an investigation into the school's use of football recruiting services. Former Ducks head coach Chip Kelly received an 18-month show-cause penalty, while the football program received three years of probation, lost only one scholarship for three years as well as getting reduced evaluation days, reduced official paid visits and a ban on the use of recruiting services during the probation period. Essentially, these penalties were a slap on the wrist for the Ducks despite Kelly writing out a $25,000 check in 2010 to street agent Willie Lyles for his recruiting aid. Oregon now enters this fall as one of the country's favorites to reach the BCS national title game. However, while I maintain that Helfrich was very deserving of a head-coaching gig, there's no question that he'll feel the pressure of living up to the high standard set by Kelly in Eugene. Having Heisman Trophy contender Marcus Mariota at quarterback will help the cause at least.

Stanford: The Cardinal had a quiet offseason — and that's exactly how they like things in Palo Alto. I couldn't help but be impressed with head coach David Shaw when I chatted with him in the spring, as he brings a sense of calmness and confidence to a program that is being considered by a lot of college football pundits as a real challenger for a spot in the BCS title game at the Rose Bowl. If I had to choose a title game clash at this juncture, I would lean towards a matchup of Alabama vs. Stanford/Oregon winner. The addition of Tyler Gaffney to a backfield that collectively will make up for the loss of Stepfan Taylor was a boost for a program that is trending upward. And Shaw told me that the team is pushing the envelope with Kevin Hogan at quarterback as he enters his first full season as the starter.

Illinois: The Fighting Illini could not have endured a worse 2012, which was Tim Beckman's first season in Champaign. With concerns about attendance and questions about just how improved the team will be in the fall, Illini Nation received great news when former Oklahoma State signal-caller Wes Lunt decided to transfer to Illinois over Louisville. The addition of Lunt is a great "get" for the embattled Fighting Illini head coach, as the spread scheme that the Illini and new offensive coordinator Bill Cubit are set to run fits the QB's strengths. While Louisville is a more stable program than Illinois, Lunt should be able to step in next year in Champaign with Nathan Scheelhaase moving on. The 6-4, 211-pounder, who started five games last season as a true freshman but suffered through injuries, finished his 2012 season 81-of-131 passing for 1,108 yards with six touchdowns and seven interceptions. The young signal-caller has good size and a strong arm, and he will have three years of eligibility remaining starting next season. Lunt will act as the de facto face of the Illini's recruiting efforts this cycle, as he has stated that he looks forward to seeing what pieces Beckman and his staff can bring in and add around him.

Kentucky: First-year Wildcats head coach Mark Stoops wasted no time putting his stamp on UK's football program, as he has re-energized the fan base and somehow was able to get 50,831 fans out to the team's spring game just one year after the team had just 4,500 spectators. There's a new attitude to the program, and that has carried over to the recruiting trail, where the 'Cats are putting together a stellar 2014 haul. While the football program will never be mistaken for John Calipari's basketball factory, Stoops is determined to give UK football fans an exciting product each fall. A runner-up vote here is for Tennessee, which is thriving in its first offseason under new head coach Butch Jones. The Vols are killling it on the recruiting trail.

Notre Dame: No matter how much Fighting Irish head coach Brian Kelly may say that he focuses not on the past or future but on the present, it's likely that not a day goes by that he doesn't think about the loss of Everett Golson, whose career with the Irish is in jeopardy after he was suspended from school for academic reasons. The entire offseason following ND's national championship appearance was focused on expanding the offense with Golson as the leader of that unit. And while Kelly and the Irish catch a break by having experienced Tommy Rees on the roster as well as intriguing freshman Malik Zaire, the Irish will miss Golson's dual-threat experience, especially with questions surrounding the ground game. 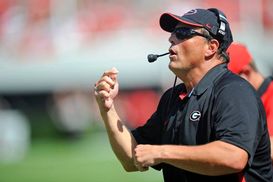 US PRESSWIRETodd Grantham's defense at Georgia is mostly untested.

Georgia: The Bulldogs already had the challenge this offseason of trying to figure out how to replace so much talent lost on the defensive side of the ball from last season's squad. Perhaps no other unit in college football lost more from its 2012 group than coordinator Todd Grantham's unit. Players such as linebackers Jarvis Jones and Alec Ogletree, defensive tackles John Jenkins and Kwame Geathers as well as safeties Bacarri Rambo and Shawn Williams are all gone. In all, the Bulldogs lost 12 players on defense who started at least two games for them in 2012. But the Bulldogs still return a lot of talent to their 3-4 scheme in 2013 because of the depth they had developed. However, the season opening task against Clemson became much more difficult when sophomore strong safety Josh Harvey-Clemons was suspended after a marijuana-related incident. The absence of the Bulldogs' defensive MVP in spring practice will make stopping Tajh Boyd and the high-powered Clemson offense much tougher. Harvey-Clemons played in all 14 games last season, making his biggest impact on special teams. But he was being counted on to be a key cog in the team's revamped secondary, which will be tested by Clemson's no-huddle, hurry-up attack coordinated by Chad Morris. He was going to be moved around all over the field because of his athleticism. The question now remains whether the Bulldogs' defense will be good enough without Harvey-Clemons in Week 1.

Virginia Tech: I still believe that Scot Loeffler will be able to get Logan Thomas back closer to his 2011 form than what we saw from the dual-threat QB in 2012. But there's no doubt that the offense was a major disappointment in the Hokies' spring game, so the performance did nothing to squash concerns about this unit. Until he gets help from his line and surrounding playmakers, Thomas will not be able to shine and improve on his NFL Draft stock, which plummeted after the disappointing 201 2 campaign. Defensively, this is a group that is ready to resemble the typical Bud Foster unit that we did not see last fall. Offensively, things became a bit more difficult with the loss of