Ohio St. safety Moeller out for the season

Ohio State safety Tyler Moeller will miss the rest of the season after an MRI revealed that he suffered a torn pectoral muscle Saturday against Illinois.

The senior will undergo surgery this week. 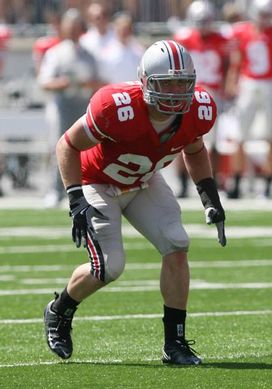 ICONTyler Moeller has been lost for the rest of the season.

Moeller was injured during the first quarter of the Buckeyes’ road win over the Fighting Illini when he attempted to tackle running back Mikel Leshoure. OSU was in its nickel package where Moeller excelled as the team's starting “star” or nickelback.

Moeller, who suffered a season-ending head injury in July ’09 after being the victim of an assault in a Florida bar and restaurant, leads the team in both tackles for loss with 4.5 and forced fumbles with 2. He has 20 tackles, a sack and an interception on the season.

He already had planned to petition the NCAA for a sixth year of eligibility.

The Buckeye secondary had already lost starting safety C.J. Barnett for the season earlier in the year and has dealt with injuries to cornerbacks Travis Howard, Chimdi Chekwa and Devon Torrence this season.

Freshman Christian Bryant likely will assume the team's starting nickelback spot after replacing Moeller for the remainder of the game against the Illini.