Ohio State may have another Beanie waiting in the wings

If Dan Herron decides to leave Ohio State for the NFL after this season, Buckeyes fans have no reason to worry about the running game.

Not with Rod Smith on the roster. 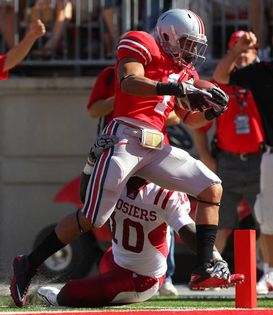 ICONEven if Dan Herron (pictured) returns for his senior season, Rod Smith could be in line for a nice workload.

The true freshman running back, who redshirted this season after joining the team late after the NCAA Clearinghouse finally signed off on his transcript, may be the most talented player in a crowded backfield that also features Jordan Hall, Jaamal Berry and Carlos Hyde.

Of course, if the junior Herron does return, head coach Jim Tressel will lean on the veteran. But Smith could be poised to assume top backup duties with Brandon Saine graduating.

The 6-3, 220-pounder, who is often compared to former Buckeye and current Arizona Cardinal Beanie Wells, has impressed players and coaches during Ohio State’s practices in preparation for the team’s Sugar Bowl tilt with Arkansas. He was the second-highest ranked player in the Buckeyes’ 2010 recruiting class according to Rivals.com, and it’s become easy to see why.

“[Tuesday] everyone was talking about Rod Smith,” senior linebacker Ross Homan said after practice this week. “He's going to be an unbelievable back, I'm telling you. He has all the physical assets, he's got size, speed, but Rod really just sits back and takes everything in. He's a humble guy, he's always in the weight room.”

“It's just how he runs, where he finds creases, explosion and stuff like that,” senior defensive tackle Dexter Larimore said. "And he's a bigger guy, which Ohio State always loves. He cuts very well for a bigger back, and I just watch him on and think, 'Man, that kid's going to be good.' I mean, obviously, he's not going to juke somebody out of his shoes. Actually, he probably could do that if he wanted to. But he's able to be physical in the hole, which we always kind of liked.”

Buckeyes fans just hope that Smith performs like the college version of Beanie Wells and not the injury-prone one we see — or don’t see — on Sundays.