Ohio State kicked off spring practice on Wednesday in Columbus as Urban Meyer began to put his mark on the Buckeyes despite NCAA sanctions preventing the squad from participating in the postseason in 2012.

Let's take a look at some of the storylines that will play out over 15 practices as the Buckeyes prepare for their spring game on Saturday, April 21.

The leader of the pack

Braxton Miller was thrust into action last season as a true freshman after Joe Bauserman failed to spark the stagnant Buckeyes offense, so the prototypical dual-threat quarterback in the Urban Meyer spread offense has a solid background of game experience to take into Year 2 as a starter. Miller led the Buckeyes in rushing yards last fall, using his escapability to gain yards when plays broke down, and he became better as the year progressed at keeping his eyes down the field while on the run. But this spring, not only will the sophomore have to absorb the new playbook, but he will also have to handle the up-tempo nature of the offense. Meyer and Tom Herman will be pushing the tempo all spring long to get the team acclimated, so overall team conditioning will be something to keep an eye on during these 15 practices. 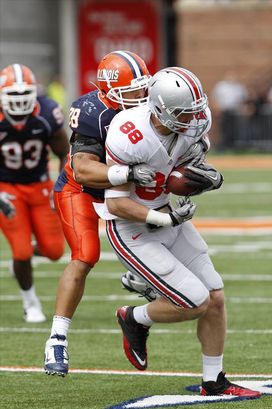 With center Mike Brewster and tackles Mike Adams and J.B. Shugarts gone, Meyer needs to determine the best offensive line configuration to make sure Miller stays upright and that the tailbacks have room to run. Jack Mewhort and Andrew Norwell will start somewhere along the line, and converted tight end Reid Fragel is already slotted to play tackle. Can Fragel make a smooth transition in his final college season with no experience at the position? Brian Bobek is the likely replacement for Brewster at center, but he will have to hold off Corey Linsley. Marcus Hall and Antonio Underwood will also get a fresh start to impress under new line coach Ed Warinner. And keep an eye on early enrollee Taylor Decker to see if he can make a strong first impression. These spring drills will be critical for Meyer and the offensive staff to see what this line consists of up close.

Are there enough playmakers on the roster?

The most experienced returning receiver is Devin Smith, who had just 14 catches last fall. Meyer was unable to land a stud receiver such as Stefon Diggs in the Class of 2012, so the pressure will be on Smith, Evan Spencer, Corey Brown and Verlon Reed. How much have they improved and can they be consistent from week to week? Brown and Reed showed flashes of big-play ability last fall. On the plus side, expect the tight ends to be a big part of this offense. Jake Stoneburner headlines a deep TE corps that also features Jeff Heuerman and Nick Vannett. Expect Stoneburner to be a real nice safety valve for Miller as he continues to develop. At running back, Boom Herron's loss has seemed to go under the radar, but it's a big void to fill. However, Jordan Hall, Carlos Hyde, Rod Smith and incoming freshman Bri’onte Dunn give Meyer nice backfield options, and that foursome should be in a dogfight in the battle for carries. Hyde, Smith and Dunn are all over 220 pounds, so they will likely be the short-yardage backs. It will be interesting to see how the backs adjust to taking carries from the shotgun, though, which the Buckeyes will be in most of the time. Overall, Meyer will get as much east-to-west speed on the field as possible so he can stretch out opposing defenses.

The defense will never rest

Meyer has raved about defensive lineman John Simon, who is the team's best pass rusher and could move to the outside after dropping weight. However, he still may slide inside to tackle in obvious passing situations. Fellow starters Johnathan Hankins and Michael Bennett also return, as well as backups Garrett Goebel, Adam Bellamy and J.T. Moore. And keep an eye on if end Nathan Williams is able to come back from microfracture knee surgery. Early enrollee Se’Von Pittman is an SEC-type defensive lineman from the Class of 2012, and he'll be joined by fellow blue-chip linemen Noah Spence, Adolphus Washington and Tommy Schutt in the summer. The linebacker corps outside of Ryan Shazier could be a question mark, however. Etienne Sabino played well against Florida in the Gator Bowl, but can he sustain that success for a full season? Top Class of 2011 recruit Curtis Grant was a real disappointment last fall, so can he show his potential in his sophomore season? Keep an eye on early enrollees Luke Roberts and Joshua Perry to see if they can make a push up the depth chart. Co-defensive coordinator Luke Fickell will once again work with the linebackers, and that's a good thing for the Buckeyes. Meanwhile, the secondary returns a ton of experience.