Ohio State will hold a news conference at 5:15 p.m. ET Monday evening to introduce Urban Meyer as its next head football coach, according to multiple reports. 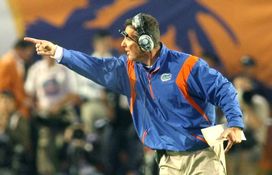 iCONUrban Meyer will be the new head coach at Ohio State.

Meyer signed a six-year deal that will pay him a base salary of $4 million per year. The contract includes performance bonuses for the team's on-field performance as well as players' academic performance.

The former Florida head coach led the Gators to two BCS national championships before stepping down after last season. Since stating that he wanted to spend more time with his family after dealing with health concerns, Meyer has worked as a game analyst for ESPN.

The Ohio native will take over one of the richest programs in America, but one that also dealt with a year of NCAA violations and suspensions. The Buckeyes concluded their regular season with a loss at Michigan on Saturday, dropping their mark to 6-6 under first-year head coach Luke Fickell. Fickell will coach the Buckeyes in their upcoming bowl game and remain on Meyer's staff.

The 47-year-old Meyer has compiled a 104-23 record over 10 seasons with Bowling Green, Utah and Florida. He will take over an Ohio State program facing NCAA sanctions, but he also inherits a team with a freshman quarterback in Braxton Miller who possesses all the tools necessary to run his spread offense.