Are Ohio State fans ready for the J.T. Barrett era in Columbus? 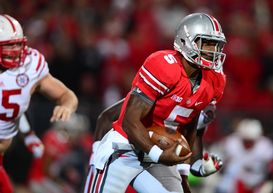 US PRESSWIREWill dual-threat QB Braxton Miller be shelved for an extended period?

While it is too early to speculate on the future of the quarterback position for the Buckeyes, the present state is nothing but murky after senior starter Braxton Miller re-injured his right shoulder in practice on Monday, as first reported by The Columbus Dispatch.

The severity of the injury is uncertain, but a season in which many believed Miller could contend for the Heisman Trophy is certainly in jeopardy. Per Jeremy Fowler of CBSSports.com, Miller is scheduled for an MRI on Tuesday morning.

Head coach Urban Meyer may have to turn to redshirt freshman Barrett when the Buckeyes open the season against Navy on August 30 in Baltimore. Barrett is ahead of sophomore Cardale Jones on the depth chart, according to what Meyer and offensive coordinator Tom Herman said last week.

Miller, who threw for 2,094 yards and 24 touchdowns while rushing for another 12 scores last fall, was coming back from shoulder surgery in February after his right throwing shoulder was injured during the Orange Bowl against Clemson. He did not take contact in spring practice and most of preseason camp, but he had been expected to push himself in Monday afternoon's practice. Did he push himself too hard too soon despite proclaiming that he was 100 percent?

Ohio State held a scrimmage on Saturday, and Meyer told the media afterwards that Miller was being held back by some soreness despite the shoulder being structurally fine.

While the Buckeyes do play a weaker schedule than most of the expected College Football Playoff contenders (only one opponent is ranked in the AP's preseason Top 25), a Week 2 home game against Virginia Tech would be difficult without Miller, as Barrett would face a stiff Bud Foster-led Hokies defense behind an offensive line that is still trying to gel and without power back Carlos Hyde, who is now in the NFL.