The teams don't meet again on the football field until October 29 in Columbus, but already there is bulletin board material for the Wisconsin-Ohio State clash next fall. 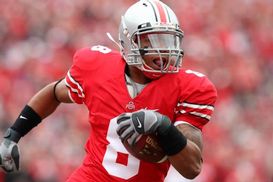 Jared Sullinger and his teammates aren't the only ones upset about losing their first game of the college basketball season on Saturday afternoon at the Kohl Center against Wisconsin, as DeVier Posey, a star receiver on the school's football team, vented his frustrations on Twitter following his school's loss to the Big Ten rival Badgers on the hardwood.

"I'll be totally honest I hate wisconsin.. With a passion Yeah I said it !!! I can't wait to play them again next season!!! Just being honest.

"Watching a game like that gets yo competitive juices going something crazy !!! Can't wait."

Posey caught 53 passes for 848 yards and 7 touchdowns for the Buckeyes last season but was one of five players suspended by the NCAA for the first five games of 2011 for selling memorabilia items and receiving improper benefits. He will, however, return in time for the clash with the Badgers.