Okie State could be without 3 WRs against Texas Tech

Oklahoma State head coach Mike Gundy said on his radio show Tuesday night that his team could be without three wide receivers for Saturday’s Big 12 clash at Texas Tech.

Gundy announced that Michael Harrison will definitely miss the contest and be out of action for about 10 days following surgery to repair a fractured finger. A pin was placed in Harrison's finger, which had a spiral fracture in three places. 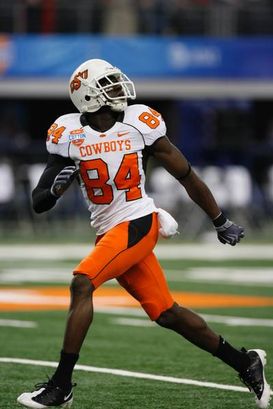 Hubert Anyiam, who caught three touchdowns this year, isn’t expected to play either because of a sprained ankle.

Both Harrison and Anyiam caught touchdowns in last week's win over Louisiana-Lafayette.

Gundy was unsure whether Josh Cooper would be able to compete against the Red Raiders after sustaining a head injury last week. Cooper, who has 22 catches for 259 yards and a score this year, practiced Tuesday but will be re-evaluated Wednesday before a decision is made on his status.

Okie State's passing attack is second in the nation in yards per game at 362.0 under first-year coordinator Dana Holgorsen, who brought the spread attack to Stillwater.