Spring practice kicked off in Norman on Monday as Oklahoma looks to put behind a disappointing non-BCS season in 2011.

Let's take a look at some of the storylines that will play out over 15 practices as the Sooners prepare for their spring game on Saturday, April 14. 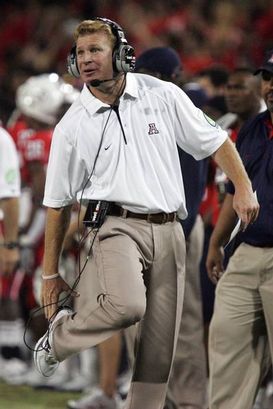 ICONMike Stoops has returned to Norman as OU's defensive coordinator.

Brent Venables left to accept the Clemson defensive coordinator job after head coach Bob Stoops brought his brother, former Arizona head coach Mike Stoops, back onto the staff. So it's Mike Stoops who will assume the DC role. And he's had success in Norman before, helping the Sooners capture the BCS national championship in 2000. Despite its rough patches last season -- and there were some bad performances -- this secondary is talented. The expectation is that Stoops will elevate its play and help the defensive backfield live up to its capabilities. It will help if the Sooners can generate a pass rush, however. And replacing Big 12 defensive player of the year Frank Alexander and future pro Ronnell Lewis will be difficult. Keep an eye on R.J. Washington and David King to see if they can elevate their play at defensive end. In addition, the linebackers were overseen by Venables, so Stoops will have to build relationships with that group of players this spring, as well.

An expanded role for the Belldozer?

With Landry Jones returning for a final season, change-of-pace quarterback Blake Bell will have to wait his turn to have his name in the starting lineup. But that doesn't mean that he won't still be a big part of the Sooners' offense. In the team's final six games of 2011, the bruising QB rushed for 13 touchdowns as he was a brute force in short-yardage situations. With the offensive staff seeing how dominant he was on the ground, don't think that more packages won't be designed exclusively for Bell.

One of the better stories nationally last season was the emergence of running back Dominique Whaley, a former walk-on who led the team with 627 rushing yards before he broke his ankle. Whaley will miss spring drills, so Roy Finch, Brennan Clay and true freshman Alex Ross will get the reps with Whaley sidelined and Brandon Williams transferring from the program.

Landry Jones looked lost last season when star receiver Ryan Broyles went down with injury, so the veteran signal-caller will need to adjust to life without his clutch receiver this season. Trey Metoyer, a former five-star recruit from the Class of 2011, could emerge as a top option for Jones. He signed with OU last year but didn’t qualify. Now, he could be the playmaker on the outside that this offense needs with the loss of Broyles. He could be a major contributor immediately. The Sooners will also have two of their Class of 2012 tight ends enrolled early, so Jones will be getting comfortable with his new weapons this spring.