The Oklahoma Sooners kicked off spring practice on Monday as one of the popular early picks to advance to next year’s BCS national championship game. Bob Stoops’ squad is clearly one of the most talented teams in the country, but will the high expectations be too much for the squad to bear?

Let’s take a look at some of the key storylines for Oklahoma entering spring camp. 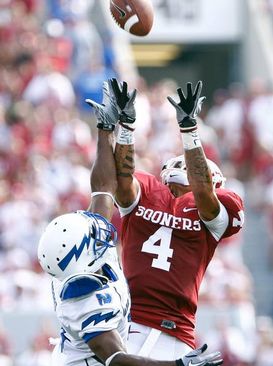 Quarterback Landry Jones returns to Norman with two dynamic receivers to make plays for him on Saturday afternoons. Ryan Broyles’ decision to return to school was a little surprising after his astonishing numbers last season — 131 catches for 1,622 yards and 14 touchdowns — but his presence will only make rising sophomore receiver Kenny Stills that much better. Stills stepped up when teams focused on his veteran counterpart, as he started all 14 games and broke Broyles’ freshman receiving record with 61 catches for 786 yards and five touchdowns. Keep an eye on Justin McCay, as well. The receiver was OU’s top prospect in the Class of 2010 and is an explosive athlete. He could give the Sooners a third big-time threat if he can improve his route running.

While coordinator Kevin Wilson has moved onto the head gig at Indiana, co-coordinators Josh Heupel and Jay Norvell will keep this offense productive. Heupel was previously the team’s quarterbacks coach and called the plays for the Sooners in the Fiesta Bowl while Norvell was the receivers coach.

Are there health concerns at running back — again?

DeMarco Murray’s inability to stay healthy was well-documented during his time in Norman. However, he was able to put together an injury-free senior year in 2010 while getting relief from Roy Finch, who had a productive freshman campaign. Finch is expected to participate in practice this spring after missing the Fiesta Bowl with a stress fracture on his left foot. The 5-8, 180-pounder missed the first five games of his debut season with a similar injury, so his durability might be an issue. However, when on the field, he made quite an impression — especially early in conference play before slowing down. The good news for the Sooners is that they have backfield depth, with Brennan Clay and Brandon Williams. Finch is a big play waiting to happen, though, so he will have to remain on the field for OU to maintain balance offensively all year long. However, Williams was the jewel of the recent recruiting class and should contribute right away if he is pressed into action.

There’s no question the Sooners will put up points. But can the defense be consistent enough on a week-to-week basis to make them a true national title contender?

The defensive line is young and inexperienced. There will likely be a rotation at play inside at defensive tackle between Jamarkus McFarland, Stacy McGee, Daniel Noble and Casey Walker. Can they bring pressure and remain stout against the run? Meanwhile, Aaron Colvin is slated to be the team’s starting strong safety after playing in spurts as a true freshman. But all eyes will be on inexperienced cornerback Gabe Lynn, who is expected to replace Jamell Fleming at least until the fall because of academics. If Fleming is unable to return, it could really hamper OU’s ability to defend the pass. Look for secondary coach Willie Martinez to put the best defensive backs on the field — however it shakes out.

Note: Oklahoma will play its annual spring game on April 16.