Oklahoma State begins spring practice on Monday in preparation for the team's spring game on April 21.

Let's take a look at some of the storylines for the Cowboys that will play out over their 15 practices. 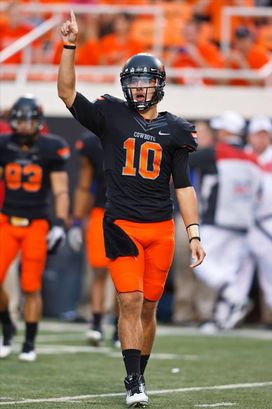 Brandon Weeden is moving onto the NFL, so a three-man battle for the starting job at quarterback will be waged between junior Clint Chelf and freshmen J.W. Walsh and Wes Lunt. Chelf has had more time in the program, but head coach Mike Gundy has maintained that Chelf doesn't hold an advantage. He has thrown for 520 yards and 5 TDs in limited action. Walsh is a dual-threat talent that will need to prove that he can effectively throw the football as well as he runs, while early enrollee Lunt has the strongest arm of the bunch. However, it will take a great deal of maturity and hard work for him to be handed the keys. Gundy is expected to name the starter at the end of the spring drills after the trio shares reps. Whoever is the starter will be able to lean on running back Joseph Randle, who returns after rushing for 1,216 yards and 24 scores last season.

Who will catch the football?

Stud receiver Justin Blackmon will now be playing on Sunday afternoons, and Josh Cooper and Hubert Anyiam are also gone. Worse yet, Michael Harrison left the team after being suspended by the NCAA for the entire 2012 season. So who will step up as the next go-to guy in Stillwater? Tracy Moore, Josh Stewart and Isaiah Anderson will need to have strong springs in order for coordinator Todd Monken to have confidence that his air attack will be productive in the fall. Also keep an eye on tight end Blake Jackson, an early-enrollee JUCO transfer who was an All-American last year.

Safety Markelle Martin's departure is a big loss for the big-play Pokes defense. Lavocheya Cooper will likely step into Martin's place and join fellow saftey Daytawion Lowe. Wyoming transfer Shamiel Gary also could find his way into the mix. Eight starters return on Bill Young's defense, which was a "bend but don't break" unit last fall. The linebacking corps is the strength with the returning Shaun Lewis, Alex Elkins and Caleb Lavey. The biggest question is up front, where the Pokes will need to get a productive rush with ends Jamie Blatnick and Richetti Jones gone. Nigel Nicholas has moved from tackle, but Ryan Robinson, Cooper Bassett and Tyler Johnson need to elevate their games to give the Pokes pressure from that spot.