Oklahoma's future is bright at quarterback

Landry Jones is in no danger of losing his starting job as the Oklahoma quarterback. After all, he's been starting since his redshirt freshman season after Heisman Trophy winner Sam Bradford was injured.

The Sooners' veteran signal-caller played just one series in Saturday's spring game, going 4 of 8 through the air for 23 yards, before turning things over to his backups. But it is the depth at the position that has to make OU fans excited about the future once Jones is playing on NFL Sundays.

The rest of the contest, Blake Bell (of "Belldozer" fame), Drew Allen and Kendal Thompson led the OU offense directed by co-offensive coordinator Josh Heupel. And though the others played well, Bell's performance through the air was very encouraging, especially if Jones happens to miss any significant amount of time with injury this fall.

Bell completed 14 of 19 passes for 179 yards and a touchdown, and he showed that he can be an accomplished thrower just like in his prep days in addition to being a bruising short-yardage runner, which the 6-6, 245-pounder excelled at in the second half of 2011. 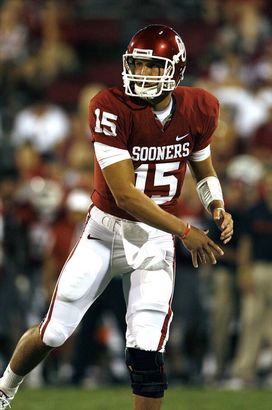 Allen, meanwhile, is a veteran of the OU program. His opportunities on the field, however, have been limited. Keep in mind that Jones just beat out Allen for the backup job to Bradford in 2009, and Jones just simply took advantage of the opportunity and ran with the starting gig. On Saturday, the 6-5, 239-pound Allen completed 10 of 18 passes for 72 yards, showing the offensive staff that he could be a dependable No. 2.

No matter who is listed as the top backup on the depth chart when the season opens, the Sooners have very good talent and depth at the position. And they also have very solid options at receiver for those signal-callers.

Freshman receiver Trey Metoyer, finally on campus after failing to qualify a season ago, caught six passes for a game-high 72 yards. Jaz Reynolds, meanwhile, recorded a 60-yard touchdown on a throw from Bell. Getting comfortable with the receivers is huge for any quarterback, especially Jones, who struggled when stud Ryan Broyles went down to injury last fall.

Metoyer has been praised all spring long, and he can be the outside deep threat that this team will need with Broyles gone. He has good size and hands, is physical and fast. He will be even more dangerous when he matures as a receiver. Kenny Stills, however, needs to be able to shed his propensity for drops. In addition, OU welcomes three of the better receivers in the nation this summer. The cupboard certainly isn't bare for Bob Stoops and Co. They just need someone to fill the leadership void at the position left by Broyles. That should be Stills, but he struggled with drops late last season.

Many fans were upset when Max Browne, the nation's top quarterback in the Class of 2013, decided to commit to USC. But the Trojans were considered the frontrunner anyway. The most important thing for Sooner fans to realize is that Allen would be a very good fill-in this fall if Jones misses any time, and Bell would thrive as a passer as well.

And that's the biggest thing to take away from the team's spring showcase this past weekend.