As I mentioned earlier in the week, Ole Miss is poised to land one of its most stellar recruiting classes in program history in head coach Hugh Freeze's first full recruiting cycle.

The Rebels are currently ranked No. 13 in the National Football Post's Top 25 Class of 2013 team recruiting rankings with National Signing Day a little more than one week away.

While players could commit and decommit before Signing Day, which is on February 6, the Rebels have a lot of momentum heading into a big weekend on the recruiting trail, as some of the nation's best prospects will be in Oxford for a visit. 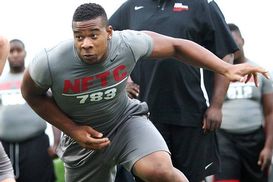 Robert Nkemdiche is in Oxford for an official visit this weekend.

For a school that endured a disastrous 2011 campaign that led to the firing of Houston Nutt, it's amazing how much talent will be on campus this weekend. Prospects taking official visits include defensive end Robert Nkemdiche, the nation's top overall player whose brother starts at linebacker for the Rebels; Laremy Tunsil, who is the nation’s No. 1 offensive tackle; Laquon Treadwell, the country's top wide receiver who recently gave a verbal commitment to the school; Tony Conner, arguably the top uncommitted safety who has reportedly narrowed his decision down to either Ole Miss or Alabama; former Auburn commit Arshad Jackson, a tight end from Georgia; and offensive lineman Austin Golson, an Alabama native who is verbally committed to Florida State but will make his second consecutive visit to Oxford.

There has been a lot of buzz about what Freeze is doing in Oxford after taking the Rebels to the postseason in his first season, so this weekend is huge in helping to finalize what would likely become a Top 10 haul if Nkemdiche makes his commitment to the school official on Signing Day.

Freeze already has a few top prospects in the fold with signed Letters of Intent, including defensive tackle Lavon Hooks, who was one of the top-ranked JUCO players in the country; wide receiver Nickolas Brassell, who is back in Oxford after being forced to transfer out in May after becoming academically ineligible; running back Mark Dodson Jr., an all-purpose back who finished his prep career as the 2012 Tennessee Gatorade Player of the Year; and athlete Quadarias Mireles, who originally signed with Ole Miss out of high school in 2010 but spent the last two years in community college and could make an instant impact on special teams as a kick returner.

Freeze also has verbal commitments from defensive end Elijah Daniel, who held offers from major programs such as Clemson, Florida State, Georgia, Michigan and Oklahoma; quarterback Ryan Buchanan, a pocket passer with vast experience working both under center and from the shotgun who had scholarship offers from Alabama and Florida; and running back Kailo Moore, who chose the Rebels over major programs such as Tennessee and Alabama.

The Rebels have used all of the buzz around their program to their advantage up to this point. Will it help this weekend when a few stud uncommitted prospects are in town?