On the recruiting trail: Notre Dame lands another defender

• Over the weekend we discussed Notre Dame’s impressive defensive coup, netting four-star defensive ends Ishaq Williams of New York and Aaron Lynch of Florida, giving the Fighting Irish two legitimate pass-rushing threats in the 2011 class. Both participated in the recent U.S. Army All-American Bowl, as well as fellow commit Stephon Tuitt, who made a recent visit to Georgia Tech in Atlanta.

The Irish weren’t quite done, however, as they netted a surprise commit in 6-6, 265-pound defensive tackle Chase Hounshell from Kirtland, Ohio, who originally was slated to go to Florida. The three-star prospect was supposed to enroll early in Gainesville but changed his mind after hosting Notre Dame coaches on Monday night. There's a chance that he could end up at end, which would make him the seventh defensive end to commit to the Irish during this recruiting season.

Remember just a few months ago when Notre Dame was losing commits left and right — most notably four-star defensive end Clay Burton and Lynch? A lot has changed since then for head coach Brian Kelly, who is enjoying his first full recruiting class in South Bend. It’s no coincidence that the improvement in the latter part of the season for Bob Diaco’s defense has helped the cause, as Williams, Lynch, four-star defensive end Anthony Rabasa and perhaps Tuitt will provide the Irish with serious pass-rushing depth moving forward. 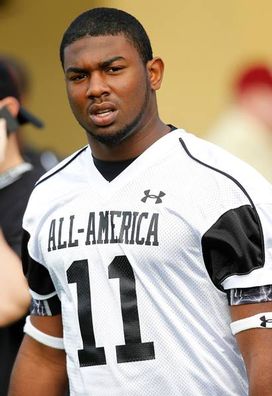 ICONCould Jay Rome be part of a standout recruiting class at Georgia?

• As we mentioned on Saturday, Georgia products and teammates Malcolm Mitchell and Jay Rome will make their college choices official on Thursday. One person of particular interest who will be in attendance is five-star defensive end Ray Drew of Thomasville, Ga., who recently visited Miami (FL) and reportedly has decided on his college choice but will delay the announcement until signing day. Drew, who will make his final official visit to Clemson this weekend, knows both Mitchell and Rome and said he’s interested in where they decide to go. Besides the Tigers and Hurricanes, Georgia, Auburn and LSU are considered finalists. Could the three recruits be in cahoots and land in Athens?

• Four-star safety Cortez Davis of Daytona Beach, Fla., confirmed his commitment to Clemson after taking his official visit over the weekend and will not be joining high school teammate Marlin Lane, a running back who visited Miami with Davis the previous weekend. Davis and Lane had planned to go to the same school, but Clemson is no longer pursuing Lane while the 6-3, 194-pound Davis is no longer considering playing for Al Golden and the Hurricanes.