Oregon travels to Tempe on Thursday night for a Pac-12 clash with Arizona State at Sun Devil Stadium.

The Ducks have won seven straight against the Sun Devils, including four in a row in the desert. Chip Kelly's team is looking to continue its undefeated season, while Todd Graham's squad is looking to remain unbeaten in conference play.

Oregon recorded 327 yards on the ground last season in a 41-27 win over the Sun Devils, so quarterback Marcus Mariota and running backs Kenjon Barner and De'Anthony Thomas will be looking to put up similar numbers against a Sun Devils defense that ranks first in the Pac-12 and fifth nationally in total defense.

Let's take a look at three things to watch in the clash between the Ducks and the Sun Devils on Thursday evening. 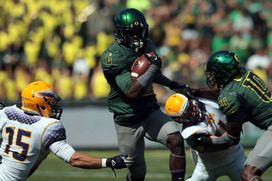 US PRESSWIREDe'Anthony Thomas is always an X-Factor when he steps onto the field.

1. Grounding down the Ducks: Oregon has one of the most prolific ground games in the country with Barner, Thomas and Mariota, ranking No. 4 in the nation with over 300 yards per game. Freshman Byron Marshall could also see some carries as Kelly has perhaps the deepest backfield in the nation. But the Ducks will be going up against a Sun Devils defense that has been strong thus far this season, allowing just 272.7 yards per game. And keep in mind that this unit is used to seeing an up-tempo attack in practice every day, as ASU has a prolific offense of its own. However, this is a Ducks rushing attack that can't be duplicated in a practice setting or in a game. Barner and Thomas are Heisman Trophy contenders, and you never know where "Black Mamba" is going to line up, which will make things awfully difficult for the Sun Devils. Defensive tackle Will Sutton leads a unit that is second nationally in tackles for loss with 59, with the junior recording 13 stops for loss as well as 8.5 sacks. He will need to come up huge if the high-flying Ducks attack is going to be grounded.

2. Kelly's protection of the football: The only two interceptions that Sun Devils quarterback Taylor Kelly has thrown this season came in the team's lone loss at Missouri. Other than that game, he has been superb. In his last three contests he has thrown 11 touchdowns and is one of the main reasons that ASU is sitting pretty in the Pac-12 South. He ranks third behind only Geno Smith and Nick Florence in passing efficiency and has a 14-2 touchdown-to-interception ratio. Tailbacks Cameron Marshall, D.J. Foster and Marion Grice have complemented the passing attack, and Kelly remains a threat on the ground as well. But the Sun Devils offense will see a variety of looks from the Ducks under defensive coordinator Nick Aliotti, whose unit is led by linebackers Michael Clay and Kiko Alonso as well as cornerbacks Ifo Ekpre-Olomu and Terrance Mitchell. Kelly's recognition of Oregon's various defensive looks will be huge when the Sun Devils need to move the ball through the air. He will be trying to extend his streak of 99 passes without an interception against a team that has run back four picks for scores already this season.

3. Mariota on the road: Mariota, who became the first freshman since 1991 to begin a season as the Ducks starting quarterback, has completed 68 percent of his passes for over 1,30 yards and 15 touchdowns against five interceptions thus far. But Sun Devil Stadium will be a raucous environment filled with plenty of fans who will have been hanging out on Mill Avenue all day. You know what that means. The stands will be filled with spectators clad in black T-shirts, and the Sun Devils will know they'll have a chance to make a statement on a national stage. I expect the Ducks' offensive staff to get Mariota comfortable early, so expect a lot of short passes to get the signal-caller in a rhythm early. Because ASU will focus on the Ducks' running game, Mariota could have an opportunity to make plays through the air. But if he's put in difficult third and longs, look for the Sun Devils to use a variety of stunts to force him into mistakes. That is, of course, if they don't get to him first. Keep in mind that ASU ranks second in the nation in sacks and tackles for a loss.