Oregon's offense in good hands even without Thomas

Darron Thomas raised eyebrows Saturday night when he announced that he was declaring for April's NFL Draft.

Despite the fact that the Oregon quarterback is close to earning his degree (Rob Moseley of The Register-Guard was told Monday that he's close and on track), it was assumed that the school's all-time leader in touchdown passes would return for his senior season and help a loaded offense make a run at yet another BCS game and possible national championship.

But Thomas, who went 23-3 in his career after winning a preseason quarterback battle with Nate Costa prior to the 2010 campaign, is leaving Eugene to go to the next level.

So who is ready to step in and take over Chip Kelly's up-tempo, spread-option attack?

Rising sophomore Bryan Bennett is the likely choice to start the 2012 opener, as he'll lead the Oregon offense when it opens spring practice on April 3, and he's no stranger to operating this Ducks attack. 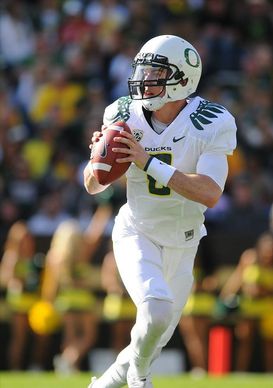 ICONBryan Bennett has stepped in for Darron Thomas once before. Now he'll likely be tasked with the full-time gig.

Coming off of the bench for an injured Thomas against Arizona State this past fall, Bennett rushed for 65 yards on just 5 carries to help finish off a 41-27 win over the Sun Devils. The next week against Colorado in his first career start, he completed 11 of 20 passes for 156 yards and two touchdowns against no interceptions. He added 69 yards on just 6 carries in an impressive win on the road. In fact, many Oregon fans weren't too concerned with Thomas coming back from his knee injury. Bennett was that impressive, and he's projected to be a more pure passer than Thomas in addition to being an even faster runner.

Combined with mop-up duty, Bennett finished the season with 369 passing yards and 6 touchdowns against no interceptions, but he only completed 54.3 percent of his throws. In a precision offense, that number will need to increase for Bennett to be more effective through the air. And it should, especially with No. 1 reps.

While it's hard to have envisioned Thomas losing a potential quarterback battle with Bennett next fall, the fact that coaches think highly of the 6-2, 193-pounder from Encino, Ca., may have helped Thomas make his decision, as Bennett's upside really would have helped push him for playing time next season even with Thomas as the starter. And keep in mind that Kelly loves healthy competition, so spring and fall camp would have been interesting if Bennett impressed.

Working in Bennett's favor next season is, of course, the dominant Ducks rushing attack, which helps open up the passing game. Kenjon Barner will be returning, and he'll provide the consistent ground attack that was headlined by LaMichael James the last few years. Pac-12 freshman of the year De'Anthony Thomas also returns, and Bennett was impressive as a runner when he was on the field last year, rushing for 200 yards on just 23 carries.

And when he's asked to pass, Bennett will have plenty of weapons to utilize.

De'Anthony Thomas led the team with 605 yards on 46 receptions and found the end zone 9 times, and he'll likely be one of Bennett's favorite weapons when he's lined up in the slot. Josh Huff's role should increase, as well, after having six games of at least 50 receiving yards last fall. Rahsaan Vaughn could take over for Lavasier Tuinei as that big receiver target that Tuinei was in the Rose Bowl against Wisconsin, while David Paulson's departure will open up more playing time for athletic tight end Colt Lyerla.

While Bennett has shown that he's most effective running the football, he has a big arm and will only get better as a passer with more first-team reps. And he'll improve going through his progressions with more experience. Because of their run-first offense, Bennett should be able to easily transition into a starting role. The key for him will be his ability to use his surrounding weapons to his advantage, something that he should be ready to do consistently by the time the Ducks open Pac-12 play.

But if Bennett does fail to make the adjustment to the full-time starter, rising sophomore Marcus Mariota and true freshman Jake Rodrigues could be positioned to move up the depth chart. After all, Kelly likes to remind everyone that every position is open for competition.