Here are the scheduled matchups for the Pac-10 this week.

Washington (3-5, 2-3) at Oregon (8-0, 5-0): The Huskies will enter Autzen Stadium without quarterback Jake Locker, but his presence likely wouldn’t make much of a difference — especially considering his uneven play throughout the year. Redshirt freshman Keith Price will start under center. The real disappointment for Washington, though, has been Nick Holt’s defense. The unit is ranked 106th in the nation in scoring defense, and it likely will continue to struggle against Oregon’s high-octane offense. The Ducks have dominated this rivalry recently, winning six straight by healthy margins. Look for LaMichael James to continue to put pressure on Cam Newton in the race for the Heisman.

California (4-4, 2-3) at Washington State (1-8, 0-6): The Golden Bears will begin life without Kevin Riley, as the on-again off-again four-year starter is done at Cal after a knee injury. Junior Brock Mansion will start under center for the Bears. Cal seemingly can’t win on the road, and Cougars quarterback Jeff Tuel is becoming more fun to watch on a weekly basis. Cougars head coach Paul Wulff is on the hot seat already, possessing a 15-game Pac-10 losing streak. If Jeff Tedford’s squad falls in Pullman this weekend, his seat could become just as warm. 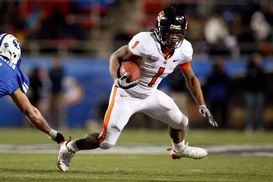 ICONJacquizz Rodgers and the Beavers head to UCLA to battle the Bruins.

Oregon State (4-3, 3-1) at UCLA (3-5, 1-4): Don’t look now, but the Beavers are still alive in the race for the Rose Bowl. Mike Riley’s squad soundly beat Cal last weekend behind Jacquizz Rodgers’ four touchdowns and the steady play of Ryan Katz under center. The Bruins have battled personnel issues all season but gave Arizona a game last weekend. However, the Bruins were held to 71 rushing yards and hope that Richard Brehaut can help improve the struggling passing game. It showed signs of life last week. Can they snap their three-game skid at home?

No. 15 Arizona (7-1, 4-1) at No. 13 Stanford (7-1, 4-1): This is easily the game of the week in the Pac-10. Not only are the squads looking toward a Rose Bowl berth, but both teams have a chance to snag a second BCS bid for the league. The Wildcats outlasted the Cardinal last season in Tucson, 43-38. Nick Foles likely will start after missing two games with a dislocated his knee cap. Backup Matt Scott played well in his absence, however. The key to this one is Arizona’s defense, which will be the best unit Stanford quarterback Andrew Luck has seen this year. Even if the Wildcats get pressure, though, Luck’s athleticism combined with a solid offensive line has helped the signal caller get sacked just three times this year — tied for second fewest in the nation.

Arizona State (4-4, 2-3) at USC (5-3, 2-3): How will the Trojans respond after coming out on the wrong end of such an emotional game against Oregon? The postseason is not on the horizon for USC, but it could be for Arizona State if the Sun Devils can scrounge up two more victories. Quarterback Steven Threet looked outstanding last week and could be poised to take advantage of a soft Trojans defense.