The Pac-12 held its Media Day on Tuesday in Universal City, Calif., and it kicked off with the announcement that the media picked USC to win the conference championship. The annual poll has the Trojans claiming the league title along with the South division, while Oregon was picked to win the North division.

Here is how the Pac-12 media sees the conference breaking down this fall:

As we get closer to the start of the season, I will of course release my predictions for the six BCS conferences as well as the non-BCS leagues.

But for now, here are some of my notes from Pac-12 Media Day: 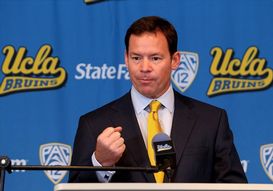 ICONJim L. Mora has yet to make a decision on the UCLA quarterback situation.

UCLA head coach Jim L. Mora on the quarterback situation: "We were looking for someone to jump out of the pack [this spring]. But that didn’t happen because the whole pack elevated. Wait two weeks into summer camp then we’ll make a decision and move forward. Whoever we go with, it will be the right decision. We’re going to put a heck of a team around whoever the quarterback is."

I have advocated for Mora to hand the reins of the offense over to redshirt freshman Brett Hundley, and I still believe that Hundley will ultimately win the job. However, Kevin Prince and Richard Brehaut have the experience. Whoever has the strongest first two weeks of camp will likely get the nod, but it's hard to imagine Bruin fans not seeing all three signal-callers take the field at some point this fall.

USC head coach Lane Kiffin wasn't in the mood to talk Penn State: Kiffin said that "there is no way you can compare what happened at USC compared to Penn State." And he's right. He also would not comment on the reported interest in Penn State running back Silas Redd or how he would deal with the NCAA-mandated 75 scholarship count if the Trojans added a Nittany Lions transfer. 'SC or any other team could go over the limit for this season, but it would affect their 2013 scholarship count. What we do know is that Kiffin is concerned about the team's depth in the backfield. Stay tuned.

Oregon head coach Chip Kelly on losing LaMichael James to the NFL: Kelly, who almost bolted Eugene for the NFL's Tampa Bay Buccaneers, said that the roles of De'Anthony Thomas and Kenjon Barner will increase with James no longer in Eugene. He expects even bigger things from Thomas in 2012. "The only thing we won't do is let him throw...you'll see him a little bit more in the kick return game, maybe punt return," Kelly said of Thomas. Asked to define Thomas' position as a running back or receiver, Kelly simply said: "I don't know what he is. He's a special player." He certainly is one of the most dynamic players in the nation, and what he did against Wisconsin in last year's Rose Bowl was just plain silly.