With the start of the 2013 college football season just a few days away, let's take a look at some power rankings for the Pac-12.

1. Stanford: David Shaw is ready to take the next step with this program, which would be toward BCS national championship game territory. The defense remains stout and could be even better than last year, and quarterback Kevin Hogan is legit. I gave the close nod to the Cardinal here because of the win over Oregon last year. 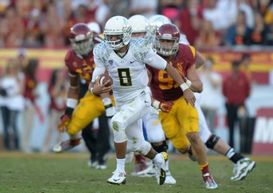 US PRESSWIRECan Marcus Mariota lead the Ducks to another BCS bowl without Chip Kelly?

2. Oregon: Mark Helfrich is ready to lead the program, and Nick Aliotti remains one of the more underrated defensive coordinators in the nation. Heisman Trophy contender Marcus Mariota could have an even more prolific season than 2012, but Scott Frost is calling plays for the first time at the major college level.

3. UCLA: Star dual-threat quarterback Brett Hundley will only continue to get better as Jim L. Mora has the Bruins trending upward. Running back is a concern, although the Bruins should be productive enough. Can the secondary limit the big plays it allowed last year in marquee contests?

4. Arizona State: Taylor Kelly finished ninth in the nation in passer rating last year as just a redshirt sophomore, and ASU returns a lot of talent from a defense that tied for 17th nationally in yards per play allowed.

5. Oregon State: The Beavers should be fine with Sean Mannion under center, but the area of concern is at defensive tackle, where former JUCO players need to step in immediately.

6. Washington: The Huskies are back at Husky Stadium following its renovations, and a big year is expected with a ton of starters returning. If head coach Steve Sarkisian is going to be able to compete for a Pac-12 crown, though, quarterback Keith Price needs to revert back to his 2011 form. He'll need better play from the offensive line to do so.

7. USC: The Trojans have the talent to be ranked higher in the Pac-12, but they need to show that they are past their struggles from 2012. Quarterback remains a mystery, though Marqise Lee is back and should have a fine season no matter who is under center. Defensively, the new scheme being implemented by Clancy Pendergast could net better results, although the secondary is young.

8. Arizona: The Wildcats should be productive offensively no matter who wins the starting gig at quarterback, but the 'Cats need to improve on defense.

9. Utah: Quarterback Travis Wilson needs to be protected by a suspect offensive line. Co-offensive coordinator Dennis Erickson was brought in for help, but there are questions all over the defense.

10. Washington State: Mike Leach enters his second season in Pullman trying to get his team into postseason consideration after missing a bowl game for the first time in all of his seasons as a head coach. The Cougars went young last year, so the experience will help this fall.

11. Cal: The Golden Bears will be a fun team to watch under Sonny Dykes. If running back Brendan Bigelow stays healthy and the offensive line improves, that could take pressure off of a defense that is talented but on the young side.

12. Colorado: Mike MacIntyre didn't inherit a stocked cupboard in Boulder, but he was a fantastic hire for a program that is dying to get back to respectability. The hope is that the team is done taking its lumps, but it has an uphill battle in this league.