Today at the NFP marks the fourth of seven pre-spring conference power rankings, continuing the series with the Pac-12.

1. USC: The Trojans arguably were playing the best football outside of LSU and Alabama when the 2011 regular season came to an end, but NCAA sanctions left them out of the postseason for the second straight year. But quarterback Matt Barkley is back for a Heisman run, and this team is poised for a BCS title run if Monte Kiffin’s defense makes a big jump in its third year. 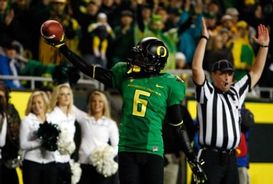 D’Anthony Thomas is ready for even bigger things in 2012 after being named Pac-12 freshman of the year.

2. Oregon: The Ducks finally delivered head coach Chip Kelly his signature win in the Rose Bowl, a game that helped Kelly get heavily wooed by the Tampa Bay Buccaneers. Quarterback Darron Thomas surprisingly left early for the NFL, so Bryan Bennett will have a chance to win the starting job. Kenjon Barner and D’Anthony Thomas will help pace the offense, and last year’s untested defense became stronger as the season went on under coordinator Nick Aliotti.

3. Stanford: The Cardinal begin the post-Andrew Luck era, but head coach David Shaw will continue to rely on a strong rushing attack and a sound defense to win games. And there are high hopes for Brett Nottingham, who is expected to win the starting QB job despite solid competition from his fellow signal-callers. Offensive line is an issue with Jonathan Martin and David DeCastro departing, so February’s best O-Line haul in school history may need to develop quickly this summer.

4. Washington: Steve Sarkisian had a tremendous offseason wooing assistants Justin Wilcox and Peter Sirmon from Tennessee as well as Tosh Lupoi, one of the best recruiters in the country, from Cal. The defense was wretched under Nick Holt, so there are high hopes for Wilcox, who led back-to-back strong Tennessee units the last two seasons. Offensively, quarterback Keith Price should make some preseason Heisman Trophy lists.

5. UCLA: I know ranking the Bruins this high will raise some eyebrows, but I’ve been very impressed with the way new head coach Jim L. Mora has come into Westwood and organized a staff that has communicated well with one another this offseason, particularly when it came to recruiting the Class of 2012 when their backs were against the wall after a lengthy coaching search by athletic director Dan Guerrero. The question now is whether that off-the-field success can carry over to Saturday afternoons in Westwood. Quarterback play is key, and that area was very inconsistent under Neuheisel.

6. Cal: The Golden Bears lost Lupoi and receivers coach Eric Kiesau to Washington, and they didn’t bring in the exceptional Class of 2012 that many had thought they would following their key verbal commitments at the U.S. Army All-American game. But head coach Jeff Tedford still can create some positive momentum if quarterback Zach Maynard can play consistent football. The longtime Bears head coach is on the hot seat, so it’s a big year for Cal, which will play in a remodeled stadium.

7. Utah: The Utes will enter their second season in the Pac-12 trying to build off of the momentum from their Sun Bowl victory over Georgia Tech. They have a lot of returning starters, and having a healthy Jordan Wynn at quarterback will help an offense that will now be run by youthful former Utes QB Brian Johnson, who replaces Norm Chow. Kyle Whittingham is one of the best head coaches in the nation, so the Utes will always be competitive no matter the conference.

8. Arizona: The Wildcats will be running the spread offense under new head coach Rich Rodriguez, so it will be an adjustment for the team’s skill position players. The biggest offseason coup for Rich Rod was getting defensive coordinator Jeff Casteel from West Virginia, something he was unable to do when he arrived at Michigan. Like Charlie Weis at Kansas, Rodriguez will only succeed if his teams play defense. 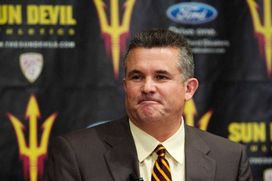 After just one season at Pitt, Todd Graham has arrived in Tempe to try to turn things around for ASU.

9. Arizona State: The Sun Devils will be ushering in the Todd Graham era, as Dennis Erickson was dismissed because his teams too often underachieved. Quarterback Brock Osweiler is gone, and the NCAA did not grant receiver T.J. Simpson a sixth year of eligibility. The team also suffered key losses on defense, so new faces will be littered across both sides of the ball as Graham implements his new program.

10. Washington State: The Cougars may have made the best hire of the offseason, bringing in former Texas Tech head coach Mike Leach, who never missed the postseason while guiding the Red Raiders. Former head coach Paul Wulff didn’t leave the cupboard bare either, especially on the offensive side of the ball. The Cougars could be primed to vault up these rankings with a strong spring.

11. Oregon State: Mike Riley has had a rough time on the recruiting trail lately, which hasn’t helped the Beavers’ on-the-field performance. This past cycle, however, was solid. While the team has been bitten by the injury bug, it can’t be used as an excuse at a BCS-conference program. Oregon State returns 17 starters this spring, so the experience will be there in Corvallis.

12. Colorado: The Buffaloes ranked last in scoring offense and scoring defense in Jon Embree’s first season, but the second-year head coach continues to install his program in Boulder. He had a solid recruiting class this February, so there’s hope for Colorado fans.