Today, we'll take a look at the Pac-12 after looking at the SEC on Monday and Big Ten on Tuesday. Tomorrow, we'll take a glance at the Big 12.

1. Oregon: Mark Helfrich is ready to lead the program, and Nick Aliotti remains one of the more underrated defensive coordinators in the nation. Stanford could have easily had this slot because of the win over the Ducks last year. But Heisman Trophy contender Marcus Mariota could have an even more prolific season than 2012, so I gave the initial nod to the Ducks — by a hair. 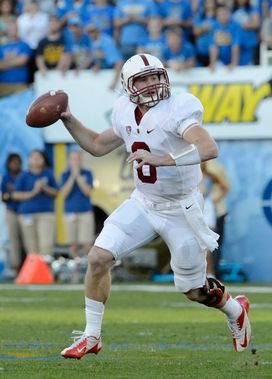 US PRESSWIREKevin Hogan is poised for a big season in his first full year as a starter.

2. Stanford: Head coach David Shaw has this program trending toward BCS national championship game territory. The defense remains stout and could be even better than last year, and quarterback Kevin Hogan is legit. The run game should also be fine without Stepfan Taylor because each member of the expected committee has different strengths.

3. UCLA: Star dual-threat quarterback Brett Hundley will only continue to get better as Jim L. Mora has the Bruins trending upward. But running back is a concern, and the secondary has to prove that it won't give up big plays in marquee contests.

4. Arizona State: Taylor Kelly finished ninth in the nation in passer rating last year as just a redshirt sophomore, and ASU returns a lot of talent from a defense that tied for 17th nationally in yards per play allowed. The biggest question is at receiver. Will Kelly have enough weapons on the outside?

5. Oregon State: The Beavers should be fine whether Cody Vaz or Sean Mannion is under center. But the area of concern is at defensive tackle, where former JUCO players need to step in immediately. Line of scrimmage play was one of the main reasons why the Beavers struggled in 2010 and 2011.

6. Washington: The Huskies are back at Husky Stadium following its renovations, and a big year is expected with nearly every starter returning. If head coach Steve Sarkisian is going to be able to compete for a Pac-12 crown, though, quarterback Keith Price needs to revert back to 2011 form. And that might start with better play from the offensive line.

7. USC: The Trojans certainly have enough talent to be ranked higher in the Pac-12, but they need to show that they are past their struggles from the 2012 campaign. Quarterback remains a mystery, though the job for the starting signal-caller is a bit easier when Marqise Lee is catching footballs. Defensively, the new scheme being implemented by Clancy Pendergast could net better results, although the secondary is very young. Can Lane Kiffin show enough this fall to come back in 2014?

8. Arizona: The Wildcats need to replace quarterback Matt Scott, whose 2011 redshirt season was the best thing that could have happened to Rich Rodriguez. And any improvement on defense will be a bonus for the Wildcats.

9. Utah: Quarterback Travis Wilson had a good spring, but will the offensive line protect him this fall? Having co-offensive coordinator Dennis Erickson on board might help. The Utes went 5-7 and failed to reach a bowl game for the first time in nine seasons in its second season in the Pac-12, so Kyle Whittingham's bunch will try to bounce back from a disappointing 2012. But there are questions all over the defense.

10. Cal: Sonny Dykes will eventually make the Golden Bears one of the most fun teams to watch. But how long will that process take? If running back Brendan Bigelow stays healthy and the offensive line improves, that could take pressure off of a defense that is talented but on the young side.

11. Washington State: Mike Leach enters his second season in Pullman trying to get his team into postseason consideration. The Cougars went young last year, so the experience will help this fall. But can Leach coax six wins out of this team playing in a tough league? Last year was the first time he missed a bowl game in all of his seasons as a head coach.

12. Colorado: Mike MacIntyre didn't exactly inherit a stocked cupboard in Boulder, but he was a fantastic hire for a program that is dying to get back to respectability. Colorado was incredibly young last season, so the hope is that the team is done taking its lumps. It's not done quite yet.