Pass rush could be key to Miami's ACC title hopes

If Miami (FL) has any chance to play for the ACC championship this fall, the Hurricanes will need to get an improved effort from a defense that was woeful last season.

As they showed in their spring game, the Hurricanes are in very good hands offensively with quarterback Stephen Morris, tailback Duke Johnson and receivers Rashawn Scott and Herb Waters. While the defense may not have been giving the offense exotic looks in the contest, the defensive staff could not have been anything but disappointed that the unit was lit up by Morris and Co. for touchdown passes on the first four series of the game — especially because the thought is that this group should be better with 10 starters returning. But the fact that the secondary looked helpless has been a cause for concern for the Hurricanes heading into preseason drills.

Because of those questions in the secondary, perhaps Miami's best chance for improved overall play on defense will start up front with an improved pass rush, an area that Al Golden's squad struggled in last fall. 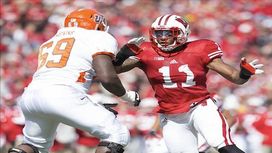 US PRESSWIREIf healthy, David Gilbert can be a nice addition for Miami's pass rush.

The 'Canes finished No. 113 nationally with a meager 13 sacks in 2012, so one of the areas of emphasis this offseason has been finding viable solutions to create more pressure. The latest addition to the pool of resources is former Wisconsin defensive end David Gilbert, who had retired in April because of constant foot injuries. Gilbert is immediately eligible to compete for the 'Canes, but the question is just what type of player is Miami bringing in?

While he recorded 42 tackles, including 9.5 tackles for loss, along with four sacks and three forced fumbles in 2012, Gilbert has a long history of foot problems, which prompted him to walk away from football. However, he may not have been happy with having to switch to outside linebacker in Wisconsin's new scheme either. If he can get through preseason practice and remain healthy, he likely will be a situational pass rusher for the 'Canes, and those decreased snaps could allow him to remain fresh for a full season. And his presence would be a nice upgrade for the Hurricanes' front.

But Gilbert hasn't been the only addition of note.

Junior-college transfer Devante Bond could be a key pick-up because of his expected production from the linebacker spot. He has the traits to be successful blitzing both from 'backer and along the line at end as well. He just needs to be cleared academically, which he is still working on.

In addition to Gilbert and Bond, top Class of 2013 product Al-Quadin Muhammad is being asked to make a difference in his freshman campaign. The defensive end recruit was one of the most highly sought pass rushers in February and was a nice coup for Golden and his staff.

Of course, Miami's sack leader from 2012, Anthony Chickillo, returns this season to anchor the line. The hope is that his veteran leadership and skill set can help lead a pass-rushing revival in Coral Gables. The help he should receive from Gilbert, Bond and Muhammad will be key to the hopes of the Hurricanes' defense of complementing what should be an explosive offense under new coordinator James Coley.

And the hope is that a stronger pass rush can help out a secondary that still has three of the four starting jobs up for grabs.

Besides safety Deon Bush, no one is guaranteed a starting gig in the defensive backfield. Ladarius Gunter and Tracy Howard are expected to battle for one cornerback spot, while Antonio Crawford and Nate Dortch should compete for the other. Meanwhile, AJ Highsmith and Rayshawn Jenkins will battle to start at the other safety position.

If the secondary can settle in before league play and the front improves, there's no question that Miami is a team to keep an eye on in an ACC Coastal division that should be wide-open this fall.