As I discussed on Wednesday's episode of The Download with Bonnie Bernstein on CampusInsiders.com, Boise State head coach Chris Petersen was Washington's top choice to replace Steve Sarkisian, who left Seattle to become the new face of USC football.

And it appears that Petersen is finally ready to leave the Broncos, as ESPN’s Joe Schad is reporting that the Huskies are expected to name Petersen the program’s new head coach on Friday. As of now, neither Boise State nor Washington has confirmed the news. 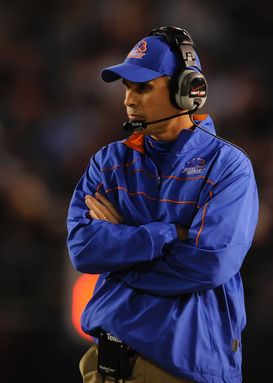 US PRESSWIREChris Petersen is headed to Washington.

Petersen, who was a candidate to take over at USC before he withdrew his name from consideration after the parties shared mutual interest, spent the last 13 years at Boise State. He was the team's offensive coordinator for five seasons before taking over as head coach in 2006. He recorded an overall record of 92-12 with the Broncos.

Alabama offensive coordinator Doug Nussmeier was also a candidate at Washington, but he was not the program's first choice. The former Huskies OC and quarterbacks coach really wanted the job.

It will be interesting to see where Boise State turns now in its quest to hire a new face of the program. Nussmeier actually makes a lot of sense. He played at Idaho and coached at Fresno State, so he is familiar with similar recruiting ground that is navigated at Boise. And he has done a great job of expanding the Tide offense the last two seasons since taking over for Jim McElwain, who left to become the head coach at Colorado State. Former Boise assistants Justin Wilcox and Bryan Harsin also could be in play for the Broncos.

Petersen led Boise State to two Fiesta Bowl wins and undefeated regular seasons in 2006, 2008 and 2009. The Broncos finished 8-4 this season, which was the team's worst mark of his tenure. He had been repeatedly approached about other job opportunities in the past but chose to stay in Boise. But he is finally ready for a new challenge in Seattle, which should provide a serene environment for him. However, he will have to deal with other challenges such as boosters and increased media scrutiny in addition to more difficult competition in the Pac-12.