Petrino will not visit Green-Beckham on Thursday

Dorial Green-Beckham, perhaps the top overall player in the Class of 2012, will not receive a visit from Arkansas head coach Bobby Petrino on Thursday, according to Green-Beckham’s high school coach. 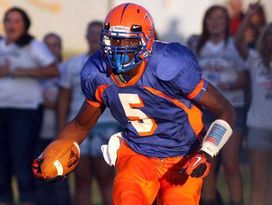 Dorial Green-Beckham caught 119 passes for 2,233 yards and 24 touchdowns in his senior season.

One possible reason for the change of plans, as Dodd explains, is the fact that Petrino and Green-Beckham ran into each other earlier this month in San Antonio, which could possibly be an NCAA recruiting violation. Petrino was in town for a convention, while Green-Beckham was attending the U.S. Army All-Star Game.

Beckham, who is also Green-Beckham’s foster father, said “another school that was recruiting Dorial happened to be there that day,” which could be a violation of Bylaw 13.17.4, which states:

Because there were NCAA recruiting quiet and dead periods in place, no in-person contact was allowed with recruits by coaches at those times. Perhaps the run-in occurred during one of these periods. Beckham did say, however, that the Razorbacks will send other coaches to visit on Thursday.

With National Signing Day approaching February 1, Green-Beckham has narrowed his list of finalists to Texas, Oklahoma, Arkansas, Missouri and Alabama. The national single-season leader in receiving yards, who is undecided and will make his decision known next Wednesday morning, has an unmatched blend of size, speed, hands and explosiveness. Because he is close to his family, many believe he won't choose a school too far away from his hometown of Springfield. Last week, I projected that he would indeed choose the Hogs.