The 2011-12 bowl season continues Friday with the Pinstripe Bowl between Rutgers and Iowa State at Yankee Stadium in the Bronx.

The Scarlet Knights and the Cyclones will be meeting for the first time. Iowa State is 3-7 all-time in bowl games, beating Minnesota 14-13 in the 2009 Insight Bowl in its last trip, while Rutgers has all four of its bowl wins under head coach Greg Schiano.

While the Scarlet Knights rebounded from an awful 4-8 season to win eight games this fall, the last time we saw Schiano's squad was in an embarassing road loss to UConn when a share of its first Big East title in program history was on the line. However, Rutgers was picked by many to finish last in the conference, so ending the season on a high note against the team that gave Oklahoma State its first loss would be a nice way to end 2011. 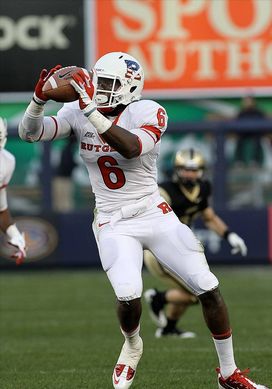 Receiver Mohamed Sanu kept the offense afloat, as he broke school and Big East single-season records with 109 receptions. The quarterback play has not been steady, however, with true freshman Gary Nova taking over for ineffective starter Chas Dodd before Dodd rallied the team to a win over South Florida. However, Dodd was once again benched in the finale against UConn. The ground game was also ineffective, especially in conference play. The team averaged just 2.6 yards per carry and less than 100 yards per contest this fall.

Defensively, Schiano's overhaul of the unit -- which included many position changes -- paid big dividends, as it was the class of the Big East. Khaseem Greene led the league with 127 tackles after moving from safety to middle linebacker, one of many moves designed to get increased speed on the field.

Paul Rhoads, meanwhile, is enjoying a longterm contract extension after taking the Cyclones to a bowl game for the second time in three years and notching a win over in-state rival Iowa and an Oklahoma State team that likely would be playing in the BCS national championship game if not for its lone defeat. After Steele Jantz was benched, redshirt freshman quarterback Jared Barnett sparked the offense to three wins in his first three starts. He has a ways to go as an accurate passer, but this offense is at its best when he uses his legs.

The Cyclones also started to clamp down defensively during their hot streak, led by the fantastic linebacker duo of Jake Knott and A.J. Klein. Both had over 100 tackles this year and can make things even more difficult for the average Rutgers offense.

Keep an eye on: The Rutgers rushing attack. The Scarlet Knights recorded -9 rushing yards in the season finale against UConn. The ground game has been subpar all season, but Iowa State is ranked 100th nationally, allowing nearly 200 yards per game. Jawan Jamison rushed for 200 yards and two touchdowns in a win over Cincinnati in November, so he's certainly capable of a solid game.