Plenty of time for BCS mess to clean itself up

The third set of Bowl Championship Series standings were released on Sunday night, and fans of Oregon may be a little disappointed by sitting at No. 4 in the rankings.

But is there reason to worry?

While some believe that they control their own destiny if they win out, the Ducks definitely were not helped in the computers because of the losses over the weekend by USC and Oregon State, two future opponents for the Ducks that were expected to help Chip Kelly's squad in the standings.

As expected, Alabama is No. 1 in the third set of rankings. Fellow unbeateans Kansas State and Notre Dame follow at Nos. 2 and 3. The Ducks are fourth while LSU sits at No. 5 as the highest-rated one-loss squad. 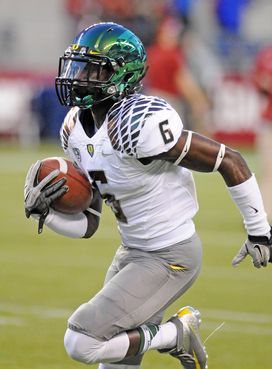 US PRESSWIREIf De'Anthony Thomas and the Ducks run the table, could they get shut out of the BCS title game?

Of course, if the Crimson Tide fall to either LSU or in an SEC title game, it's hard to see them playing for the BCS national championship. However, they fell to the Tigers last year by a field goal and still ended up playing for the title — and winning it — despite not even playing for their conference crown.

But let's assume, because they pass the eye test and are clearly a dominant team, that Alabama runs the table and continues to be No. 1 in the BCS rankings. Who could be No. 2 when all is said and done?

If you're an Oregon fan, you have to be happy that Kelly and Co. rank second in both human polls, but it's fifth with the computers. And that can be problematic because Kansas State and Notre Dame are tied for the No. 1 spot in the computers. The Wildcats may not see their computer average rise too much, however, because of their remaining schedule. Plus, keep in mind that the Big 12 doesn't have a conference championship game. That could hurt Bill Snyder and Co. And although Oregon's strength of schedule takes a hit with the losses by USC and Oregon State over the weekend, Arizona could help out the Ducks if Rich Rodriguez's squad continues to rise in the rankings.

So let's assume Oregon passes Kansas State if it runs the table. What if Notre Dame is able to take care of business the rest of the way, including defeating USC on the road in the regular-season finale?

It's just tough to see an undefeated Notre Dame, which is now the only team in the country that has defeated four ranked teams, being held out of the title game if it runs the table. The computers love the Irish, though their numbers will take a hit because of their weaker contests coming up. The problem for a team like Oregon is that Notre Dame's win over Oklahoma provided another opportunity for Kelly's team to change the national perception of the program. ND showed that it truly belongs in the discussion with the elite. Because of its strong brand name, I just feel that voters ultimately would give the Irish the benefit of the doubt over a team such as Oregon because of its strong schedule and its name value. Until we get a four-team playoff in 2014, that's just the way it is under this current system. To underline the quarkiness of the current system, the Ducks actually lost 12 points from last week in the Coaches' Poll despite dismantling Colorado.

If it remains unbeaten, only the voters can seemingly stop Oregon at this point.

It's still very early to project who will face off in Miami for the BCS title, as there are plenty of games to be played. And keep in mind that teams such as Florida, Oregon State and Rutgers suffered their first losses of the season over the weekend. But the stars certainly seem to be aligned for an Alabama-Notre Dame title game. Unless...