The 2012-13 college football postseason kicked off this past Saturday, as Arizona recorded an exciting last-second win over Nevada in the New Mexico Bowl, while Utah State capped off a strong campaign with a 41-15 victory over Toledo in the Famous Idaho Potato Bowl.

After a five-day break, the bowl season kicks into high gear as the Poinsettia Bowl between BYU and San Diego State takes place Thursday night in San Diego.

Let's take a look at some of the most important aspects of this matchup between the Cougars and the Aztecs.

• The Cougars defense: BYU's stout 3-4 defense is paced by linebackers Kyle Van Noy, who has recorded 18.5 tackles for loss, 11.5 sacks, five forced fumbles and five pass break-ups this fall, and Ezekiel Nana Ansah, whose 13.0 tackles for loss, 4.5 sacks and eight pass break-ups could make him a first-round pick in April's draft, according to many NFL personnel. Because of that dominant pair, along with fellow linebacker Brandon Ogletree and big tackle Romney Fuga, the front seven is a big reason why BYU has the nation's third-ranked defense heading into this matchup. 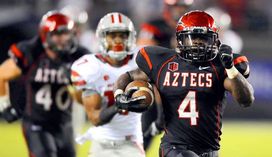 US PRESSWIREThe emergence of Adam Muema at RB has been vital to a San Diego State offense that lost versatile Ronnie Hillman.

• The Aztecs ground game: The emergence of Adam Muema at running back was vital to an offense that lost versatile Ronnie Hillman to the NFL. The sophomore finished off a fantastic regular season with 255 yards and four touchdowns on the ground against Wyoming, giving fellow sophomore Adam Dingwell help offensively when the signal-caller stepped in for Ryan Katz when he went down to injury. SDSU is averaging about 229 yards per game on the ground, but will the Aztecs be able to move the football consistently against a defense that is holding opponents to just 84 rushing yards per game? Only Notre Dame was able to effectively run the ball against BYU this season. SDSU will not stray away from the run, but if they are facing too many third-and-longs, the Aztecs won't be able to score enough points to win. Their receiving corps isn't their strongest unit outside of Colin Lockett, and Dingwell is still getting comfortable as the starter. If Muema can't get the ground game going against a Cougars defense that ranks second nationally against the run, Dingwell will have problems against an experienced secondary that features strong safety Daniel Sorensen. The Aztecs are one of only four teams in the country that have rushed for more than 150 yards in every game this season, but the Cougars have allowed just one team to rush for more than 150 yards on them this season: top-ranked Notre Dame, which put up 270 yards and wore down the Cougars in the second half.

• Go to Hoffman early and often: The Cougars offense has been inconsistent all season, with a lot of that having to do with injuries at the quarterback position. But receiver Cody Hoffman has been steady all fall, catching 90 passes despite being the focus of opposing defenses. SDSU's defense can give up some big passing plays, but can either Riley Nelson or James Lark be consistent enough to take advantage of the opportunities? Lark has the arm to get Hoffman more involved in the game, but Aztecs cornerback Leon McFadden will be all over the big receiver. Nelson, who has 13 touchdowns and 12 interceptions this fall, injured his ribs in a loss to San Jose State on November 14. Lark, meanwhile, went 34-of-50 for 384 yards and six touchdowns in a rout of New Mexico State in the regular-season finale. BYU head coach Bronco Mendenhall called his starting quarterback a game-time decision.

• The intangibles: These are former conference rivals, and the Cougars are looking for their sixth consecutive win in the series. However, this is essentially a home game for the Aztecs, and they won in the postseason here two years ago. SDSU enters on a seven-game winning streak, and that streak could extend to eight if the Cougars struggle with turnovers. BYU has been bitten by the turnover bug in a three-point loss to Utah, a one-point loss to Boise State, a three-point loss to Notre Dame and a six-point loss to San Jose State.