San Diego State and Navy will meet in the S.D. County Credit Union Poinsettia Bowl Wednesday night in a game that will feature strong fan support for both teams. The Aztecs will be playing in their home stadium while the Midshipmen will play on a field located close to a large naval base.

Speaking of the field, just what condition will it be in after heavy rains left Qualcomm Stadium under water, forcing workers to pump water off of the field to get it ready for the action? 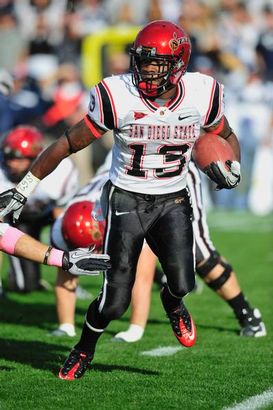 RB Ronnie Hillman, San Diego State: The freshman had an amazing debut season for the Aztecs, rushing for 1,304 yards — the first time a San Diego State running back surpassed the 1,000-yard mark since 2003. He works behind an offensive line that will have a major size advantage over Navy’s front four, so I expect Hillman to have a productive game. And if the Middies put too many guys in the box, quarterback Ryan Lindley should be able to find DeMarco Sampson and Vincent Brown down the field in the passing game.

The dynamic receiving duo combined for 17 touchdowns this year, with each catching at least 60 balls for at least 1,100 yards. Navy’s defense hasn’t faced an offensive unit quite as balanced as this all season.

QB Ricky Dobbs, Navy: The Navy attack begins and ends with Dobbs. He had a rough start to the season, but his play and health improved steadily and the Middies peaked at the right time. Dobbs needs 140 yards on the ground to become just the seventh signal caller in NCAA history to rush for 1,000 yards and pass for 1,000 yards in a season twice in a career. It will be interesting to see how the Aztecs defense responds to this attack, as it was solid in a victory over Air Force, which runs a triple-option attack as well, earlier in the season.

Head coach Brady Hoke has San Diego State back in the postseason for the first time since 1998, while Ken Niumatalolo’s Navy squad seeks back-to-back 10-win seasons for the first time in program history. Both Hoke and Niumatalolo were hot names on the coaching market the last month or so, and Hoke’s name could come up again for the Michigan job if the Wolverines lose to Mississippi State in the Gator Bowl.

One thing to keep an eye on is if San Diego State comes out sloppy — and I'm not just talking about the field conditions. The last time the Aztecs played was on November 27, while Navy should be a little more crisp executing its game plan having played Army on December 11. Can that shorter layoff be advantageous for the Middies?

It’s likely we’ll either see a big night from Dobbs or Hillman — or perhaps both. But I like the Mountain West's Aztecs on their home field because they have a little too much balance and firepower on offense.