Here are some things to keep an eye on when you're tuned into the contest between the Aggies and the Huskies.

Matt Wells had a successful first season as the Aggies head coach after taking over for Gary Andersen, who is completing his first season at Wisconsin. Despite losing star quarterback Chuckie Keeton in the middle of the year, the Aggies made it to the MWC title game in their first season in the league and gave Fresno State a tough battle in that contest.

Meanwhile, the college football world will have its final chance to watch Heisman Trophy finalist Jordan Lynch in a Huskies uniform after an incredible college career. The Illinois native, who dreamed of attending Notre Dame, will try to close out a strong season for NIU, which fell short of back-to-back BCS games when the team was dominated by Bowling Green in the MAC title game.

Getting defensive: The Aggies' strength is their defense, as the unit ranks No. 7 nationally in scoring defense and No. 10 in rushing defense. Linebackers Jake Doughty and Zach Vigil will have their hands full stopping Lynch on the ground, though, as NIU's offense averages 41.6 points and 312.5 rushing yards per game. Doughty has 140 tackles (10.5 for loss) to lead an aggressive group, and keep in mind that NIU was beat up by Bowling Green in the MAC title game. So Lynch and Co. will have to work extra hard in order to move the football against a defense that will be saying goodbye to seven starters after the game. 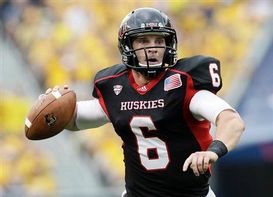 Jordan Lynch has already broken the FBS single-season rushing record for a QB.

The best dual-threat in the country?: Lynch accounted for 45 combined touchdowns on the ground and through the air this season, which allowed him to come in third in the Heisman voting, which was a real coup for the MAC and non-AQs across the country. The dual-threat has 2,676 passing yards and 1,881 rushing yards this year, and he has already broken the FBS single-season rushing record for a quarterback. A win by NIU would give the program its first 13-win season in school history. Because Utah State's offense has taken a back seat from last season's unit due to the injury to Keeton and the departure of running back Kerwynn Williams, NIU won't have to worry about getting into a shootout.

Odds and ends: NIU is favored by 2 points ... Utah State won the only meeting between the two schools ... The Huskies are in the postseason for the sixth straight year. They lost to TCU in the 2006 Poinsettia Bowl ... Utah State is playing in its school-record third straight bowl game ... The Aggies have allowed only two 100-yard rushers this season, and the defense has intercepted 16 passes in its last nine games.