Possible replacements for Akey at Idaho

Idaho announced Sunday that head coach Robb Akey was being relieved of his duties after more than five seasons with the program.

"The President [Duane Nellis] and I believe it is important to make this move now so we can immediately begin the process of hiring a new coach for the 2013 season," athletic director Rob Spear said in a statement. "We appreciate Coach Akey's enthusiasm and dedication to the University of Idaho but this is the right move at this time." 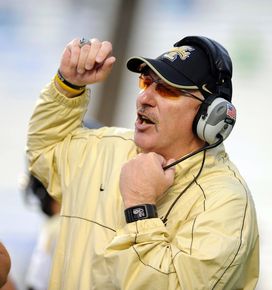 US PRESSWIRERobb Akey was fired after compiling a 20-50 mark at Idaho.

Akey finished his Vandals career with a 20-50 record after getting trounced 70-28 by Louisiana Tech on Saturday. He had one winning season during his tenure, which was an 8-5 mark in 2009 that included a 43-42 win over Bowling Green in the Humanitarian Bowl.

Idaho is 1-7 this season and will be coached by offensive coordinator Jason Gesser the rest of the way.

Where the Idaho program goes from here is a big question, as it is part of a Western Athletic Conference that is suspending football following the 2013 season. With the Vandals going independent and finding it difficult to land future opponents on their schedules, how good of a situation will a new head coach inherit?

One name to keep an eye on is former Colorado and Boise State head coach Dan Hawkins. Of course, the current ESPN announcer had a disastrous stint with the Buffaloes, but he had a lot of success with the Broncos. And although he is enjoying his announcing role, most people familiar with Hawkins believe that he is interested in returning to the sidelines.

The soon-to-be 52-year-old went 53-11 in five seasons at Boise State, had three double-digit win seasons and never won less than eight games with the Broncos.

Other possible names that could be in play at Idaho include Washington assistants and Idaho alumni Joel Thomas and Dan Cozzetto. Thomas is the Huskies' running backs coach while Cozzetto is Washington's run game coordinator. Eastern Washington's Beau Baldwin and Sacramento State's Marshall Sperbeck could also be in the mix.