Possible replacements for Graham at Pittsburgh

Paul Rhoads, a former Pitt defensive coordinator from 2000-07, just signed a new 10-year deal with Iowa State, so his return to the Steel City will not occur.

So who could be in line to replace Graham as the Panthers look for someone to stabilize the program? 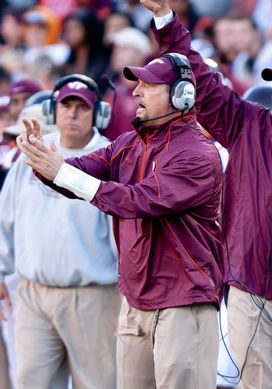 ICONBud Foster would be a great fit to replace Todd Graham at Pitt.

• Bud Foster: The Virginia Tech defensive coordinator was a candidate last offseason before Graham was hired, and he's stated that he would be "very interested" in the job this time around. He'd be able to bring back Pitt's blue-collar culture, and he's ready for a head job.

• Paul Chryst: According to the Pittsburgh Post-Gazette's Paul Zeise, the Wisconsin offensive coordinator will interview for the job Saturday. He was a candidate for Pitt's vacancy last year and was considered for the gigs at Illinois and Kansas this season. He's one of the top offensive minds in the country and seems to be ready to become a head coach. While he's a great X's and O's guy, how will he fare in a high-profile job?

• Luke Fickell: Zeise also reported that the Ohio State interim head coach has already interviewed for the job. He is slated to coach the Buckeyes in the Gator Bowl before becoming a defensive assistant under Urban Meyer. Fickell really seemed to handle all of the adversity at OSU very well this fall, and the Buckeyes improved offensively as the year went on. He is familiar with the western Pennsylvania and Pittsburgh recruiting ground, so he could be a good fit.

• Sal Sunseri: The Alabama outside linebackers coach is a former assistant coach and player at Pitt, and son Tino Sunseri is the team's starting quarterback. But his name doesn't seem to generate as much traction as some of the other rising assistants.

• K.C. Keeler: The Delaware head coach loves the Blue Hens, but would he pass up an opportunity to coach at a school that gets some of the best talent of any Big East squad? He has done well with Pitt transfer Joe Flacco and former Penn State signal-caller Pat Devlin, so he obviously can develop quarterbacks. That has been an issue with the Panthers in recent years.

• Mario Cristobal: The FIU head coach is gaining traction as one of the rising young head coaches because of the way he was able to revive a program that was left for dead by NCAA sanctions. His five-year record of 24-37 is deceiving because of how awful the program was when he arrived. He's led the Panthers to consecutive bowl games the past two seasons and is ready for a prime job.

• Randy Shannon: The former Miami head coach has an ACC background, and keep in mind the Panthers will begin play in their new league in 2013. He ran a clean program with the Hurricanes and arguably was given the hook too early. He's exactly the type of stand-up person Pitt football needs right now.